Where Do We Go From Here?

What must the US climate action movement, policy makers and concerned business sectors do as annual temperature records break and the risk rises of blowing past the temperature caps, which scientists and signatories to the Paris Climate Accord say must be achieved to stop irreversible global chaos and damage? The election of Donald Trump has driven anxiety and teeth-gnashing to unprecedented levels about resurgent climate denialism. Looking locally, what can cities and states be doing in the Trump Age that will make a difference at a scale that matters when it comes to climate change. Answers to these questions have grave implications for public security, public health and even business as usual.

First, take a deep breath and repeat when needed, "To be truly radical is to make hope possible, not despair convincing". Now, let's take a virtual tour of the landscape for climate hope.

This morning at the C40 Summit @MikeBloomberg rallied Mayors around #ClimateAction which is more important now than ever. #cities4climate pic.twitter.com/RJiCuH9XN7

First stop on our climate hope tour is the December 2016 meeting of C40. C40 is an alliance of 86 affiliated cities, home to one of every twelve people on Earth, organized for fostering city leadership in responding to the rising threat of climate change impacts and identifying what cities, rich, developing and poor can do to cut GHG emissions and lower the threat of climate change impacts by raising the resiliency capacity of all cities. The title of a new C40 report Deadline 2020 captures its sense of urgency by pegging action to the very near future, not to some number of decades in the future. "The overriding and deeply significant finding of the work is that the next 4 years will determine whether or not the world's megacities can deliver their part of the ambition of the Paris Agreement. Without action by cities the Paris Agreement cannot realistically be delivered." Why? "Over half the emissions savings identified in this routemap can be delivered directly or through collaboration by C40 city governments."

New York is among the US cities in C40 and the influence of its climate policies, started by Michael Bloomberg and carried forward by Bill De Blasio is cited in Deadline 2020 as it maps a pathway for how C40 cities could set themselves on a trajectory to deliver on the ambition of the Paris Agreement. Covering five sectors: energy; buildings; transportation; waste; and urban planning, "The emissions reduction potential of 62 programmes were modeled, comprising over 400 climate actions. City by city, trajectories were developed to identify what action must be taken and in what order, to enable all cities to contribute to the 1.5 degree ambition."

As with all voluntary associations, doing the hard work to make the kinds of deep changes that will be required to decarbonize the five sectors of city life targeted in these 62 programs will require a level of sustained commitment, financing, monitoring, measurement, enforcement and consensus that some participating cities may be unable to muster. That said, we could be surprised at how deep changes in the activities fed by our collective fossil-fuel addictions can be executed at the urban scale, maybe better than national governments led by climate change deniers. 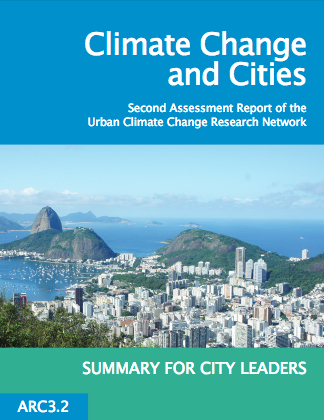 On our tour of the landscape for climate hope, C40 is not the only international urban climate-focused undertaking worth a visit. The 2015 Climate Change and Cities Report, which is the Second Assessment Report of the Urban Climate Change Research Network (ARC 3.2) produced a special Summary for City Leaders that "synthesizes major findings and key messages on urban climate science, disasters and risks, urban planning and design, mitigation and adaptation, equity and environmental justice, economics and finance, the private sector, urban ecosystems, urban coastal zones, public health, housing and informal settlements, energy, water, transportation, solid waste, and governance. These were based on climate trends and future projections for 100 cities around the world." And it is heartening to read that, "In response to the wide range of risks facing cities and the role that cities play as home to more than half of the world's population, urban leaders are joining forces with multiple groups including city networks and climate scientists." Finally, new research discovers that US states and localities can economically grow while their carbon emissions shrink, economists call this "decoupling". The problem is that the rate at which carbon emissions are falling is too slow to prevent serious global overheating, so national policy still matters, a lot.

Bill McKibben wasn't writing specifically about urban grassroots activism when he called for massive passive resistance as the climate tool of the people, but I think he'd recommend it as a path for urban climate and environmental justice activists. Grassroots activism can be a lever of change, especially for goals that look like long shots. My own view is that passive resistance is not the primary tool for a solving a problem as multi-faceted and "wicked" as climate change because the need not only to stop something but to start many new things, that "long march through the institutions" (to tip my hat to 60's radical Rudi Dutschke) calls for something else. What the specific "something else" should be in the Trump Age is not yet clear and how far it can reach, when the change agents work primarily at the urban, state, and institutional levels is something we are going to discover. Let's continue our tour.

Moving on to urban grassroots activism, New York City is home to environmental justice organizations like WE-ACT and the NYCEJA that have deep roots in their communities and decades of influencing local environmental policies and developments. Another longstanding grassroots organization of organizations is ALIGN, an alliance of labor and community groups. It works at the intersection of economy, environment, and equity to make change and build movement for a just and sustainable city. These organizations will certainly be challenged as change agents in the Trump Era, but their deep community roots give them staying power and their track record of achievement make them forces to be reckoned with. 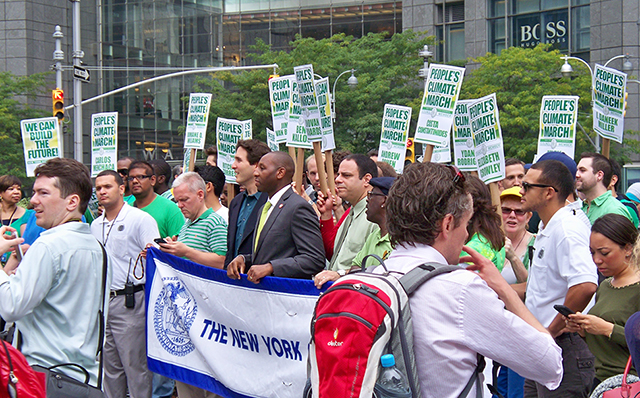 Finally, on this leg of our tour of grassroots green activism, let's take a virtual Instagram of the potential impact of GOP voters who favor renewable energy, even if they're opposed to climate-friendly politics. According to a recent survey of 1,000 Trump voters, 75% "support action to accelerate the deployment and use of clean energy — including solar, wind, energy efficiency, and community renewable projects." In 2015, the "Green" Tea Party captured media attention with its struggles to create a more eco-friendly GOP. While these GOP voters were headliners in the 2016 election, they aren't going away either.

Yes, there are climate activists in the corporate world, even if that's not what they call themselves. Here are some top-sights on our virtual tour. First, Tesla Motors, electric vehicles and advanced energy storage technologies are not looking to extend our addiction to fossil fuels. Then, check out Walmart, and Amazon Web Services or Apple, both giant energy users who are buying oodles of renewable power to operate their businesses. Now, Google is making headlines by announcing its global operations will go 100% renewable energy in 2017. Before moving on, take note of the growing financial market for "green bonds", "energy efficient mortgages" and the increasing concern in the insurance industry about the catastrophic cost of climate damage, whether from storms, floods or heat, with cities on the front lines of the risk of property and liability losses and the role of insurance in fostering disaster recovery. These corporate innovators are not going to close up shop during the Trump Age.

On The Sidewalks of New York

Welcome to the Big Apple. New York City's been an urban climate leader since Mayor Bloomberg's launch of a sweeping climate initiative in 2007 and Mayor De Blasio's extension and social justice elaboration of this arc. Like Times Square at night, it can be hard to see past the razzle-dazzle of recent building and energy code changes, program launch announcements and the long-form reports from City Hall, the latest of which is Roadmap to 80x50, to find evidence, in the form of data, information and analysis that would inform both experts and the public about what's working well and what's not working so well in local climate-action initiatives.

The local law ending the use of #6 heating oil is an indisputable victory and most of the City's cuts to its carbon footprint are attributed to it. Also, expect, over time, that new municipal construction will make for much more energy efficient buildings and the growth of necessary supply chains and skilled labor. What is less clear, however, are the impacts of the City's Energy Benchmarking and Energy Audit laws or the voluntary Retrofit Accelerator program have achieved to date or to identify other trends or emerging practices that are cutting GHG emissions and energy consumption.

That said, let's do a mini-tour of benchmarking data by way of a November 2015 research paper by the environmental justice organization ALIGN, Elite Emissions: How the Homes of the Wealthiest New Yorkers Help to Drive Climate Change, gave Donald Trump's home building at 721 Fifth Avenue an "F" for its sky-high Energy Utilization Index (EUI) rating of 216, fourth on a list of the least energy efficient luxury residential buildings in the benchmarking data base and a below-national-median Energy Star score of 43. Still, this mini-tour ends on a grace note. Since New York City climate-friendly programs are not paid for with federal funds or governed by federal laws, (although Energy Star is a federally-funded, voluntary EPA program established in 1992 for promoting energy efficiency in building and products) for the immediate future they are safe from chill winds that might be blowing from Washington. As such, New York and other climate-leading US cities can continue to act in the spirit of C40.

Busy As A Beaver in Albany

Last stop Albany, capital of a state whose symbol is the hard-working beaver. New York City and all other cities in the state will soon be feeling the impact of the State's Reforming the Energy Vision (REV), a major overhaul of the rules of the road governing the electric power sector. The REV pivots away from the decades-old model of centralized fossil-fueled power-generation and profits pegged to the amount of electric power sold to consumers. It pivots toward a regulatory model that rewards distributed clean energy production and energy efficiency. At the same time, NY Green Bank is increasing "the availability of capital for projects deploying proven clean energy technologies across New York State through... leveraging private sector capital to support and expand clean energy financing markets". Given the dominant role states have in regulating business in the electric power sector, the Trump Administration lacks direct leverage over New York's energy policies. But just in case this should change, keep in mind that the eurypterus remipes, an extinct sea scorpion, is the state fossil. 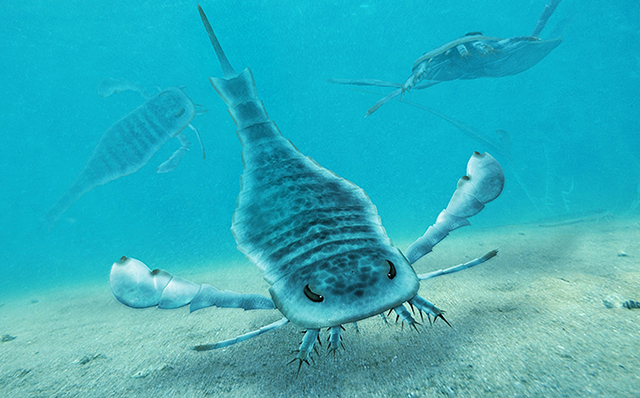 By now, many of you on this virtual tour have resumed gnashing your teeth and feeling anxious about what the Trump Era will mean and are shaking your heads at my anodyne-seeming views that make no reference to all the bad things that are threatening in the Trump Era. But I am no Candide; this is not the best of all possible worlds, certainly not with Scott Pruitt as head of the EPA.

The 2016 climate hope tour ends here: Our democracy is facing among the gravest self-inflicted threats in its history and many are writing potently about these threats and the perils we face. For now, pointing to evidence that all is not yet lost, seems the right thing for me to be doing. I hope you agree and I wish you well in the coming times.