Cutting Carbon Is The New Black

"You had me at hello", the famous line Renee Zelwegger used on Tom Cruise in the 1996 film Jerry Maguire, echoed the day I met Yeohlee Teng at her fashion-forward NYC shop, when she volunteered that local production of her clothes helped to "shrink her carbon footprint. She had me at "shrink".

Next thing I knew, I sat down for a chat with Yeohlee about her design practices, honed over a career going back to 1981, and read a book about her work. [1] Before that "shrink" moment, fashion, one of NYC's most storied industries, had meant "shopping" to me. Doing something about the city's carbon footprint and raising its sustainability quotient meant my professional work on advocacy and education around high performance buildings, renewable energy, growing good green jobs and smart infrastructure. Suddenly, new greener city vistas were opening to me and at a time where local and national attention is both riveted and riven over what kinds of jobs and what kind of society should we want to be building.

Staying in a local framework and a now decades-long discussion about whether manufacturing can be revived here, a recent report, Making It Here: The Future of Manufacturing in New York City deftly sets out the terms:

"The broad consensus is that the city's recent industrial growth is being driven by a new kind of manufacturing: small, entrepreneurial companies that are making specialty products mainly for individual consumers and businesses in the region. These makers and manufacturers are producing in small batches with quick turnaround times, investing in new technologies, capitalizing on connections to the city's thriving creative industries — including design, fashion, and film — and taking advantage of powerful demographic, economic, and consumer trends.

Sounds just like what a vibrant sector of NYC fashion industry can be, when what was old — small-scale, start up and locally-made — is new again. And to think this can be climate-friendly, carbon footprint-shrinking too!

Yeohlee explained that the path to her own fashion/carbon footprint practices arose from what she described as her frugality, which in turn was rooted in her sense of the finiteness of the planet's natural resources. When early in her career, she had the opportunity to work with seven meters of expensive fine fabric, she set herself the task of using up all of the available fabric, including the scraps, creating three gowns that are now in the Permanent Collection of the Costume Institute, Metropolitan Museum of Art, New York.. This was the essence of a zero-waste approach to fabric, labor and time in her design decisions. It has come to infuse her teaching curriculum too.

Fashion historian Valerie Steele made this observation in an interview with Yeoholee "Architecture and fashion are usually seen as opposites: one edifice, the other ornament... What does the term 'architectural fashion' mean to you?" When Yeohlee mentioned to me that she comes from a family of architects, I was struck by a parallel between efficiency as a principle of garment making and energy efficiency in climate-friendly architecture. 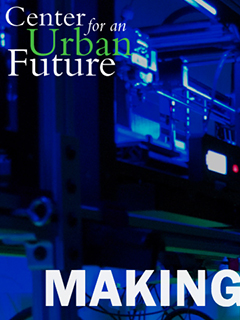 As the Making It Here report sketches the innovators in NYC's recent industrial growth, "Some are tapping into New York's status as a leading center in the back-to-local movement, where a large and growing mass of consumers are demanding locally made, artisanal products." This is a good description of Yeohlee's fashion career along with the efficiency that is a core commitment of her work as expressed in the local production of much of her clothing; her production and shipping offices are in the Garment District just a few blocks from her Flatiron district shop. [2] No long-haul flights to overseas garment factories, no energy-gobbling long-haul shipments of most of her clothing from the point of production to the point of sale. Her business exemplifies the "back-to-local movement" limned in the report and in her case, one "Benefiting from the city's rapid growth in affluent residents, many of whom are willing to pay a premium for locally-made and designed clothing".

In 2011, while serving of the Board of Directors of the Municipal Arts Society (MAS) — a position she still holds — Teng led a garment district initiative that produced [3]a report on the future of NYC's garment industry. In it, the MAS tipped its hat to the emerging importance of sustainability by calling it an increasingly important concept in manufacturing and a key driver of innovation. It also presciently noted, "A focus on the environmental and social costs of garment production will only make domestic production — where labor and environmental standards are higher — more attractive for companies.

In addition, as consumers become increasingly aware of environmental and labor practices abroad, designers may be less willing to take the risk of linking their companies with these practices". Fires and other calamities in overseas garment plants over the last few years have buttressed this prediction that knits together environmental protection with labor rights.

For Alinda Franks, Director of Community Affairs at the Industrial and Technology Assistance Corporation (ITAC), the fashion industry is coming back in NYC, and it's happening in small companies using new technologies. This represents a great opportunity to cut the industry's carbon footprint through new ways of sourcing, producing high quality clothes in small batches for niche urban markets, which can command higher prices compared to the mass garment production typical of overseas manufacturers. NYC is also seeing the emergence of co-working spaces, especially outside of Manhattan, that can put a wealth of resources at the fingertips of small and start up fashion companies at lower costs.

Tara St. James, Production Coordinator, Brooklyn Fashion + Design Accelerator sees this fashion industry comeback too. At the Accelerator there are dozens of sustainability strategies, some work in combination, others are more stand-alone. What's clear is that they're catching on with emerging fashion designers and makers. Broadly speaking, these strategies emphasize local production (within a radius of 100–300 miles), but a big challenge is finding locally produced fibers and fabrics, which can be transported to garment makers by truck rather than plane.

St. James also cites innovations like: zero waste — including highly skilled zero waste pattern making and cutting — along with upcycling — using existing material or garments to make new garments — and the "take back", especially of worn denim clothing, to make new garments by well known companies like Eileen Fisher. This fall, the Accelerator will post a new on-line tool to be used as a resource for sustainable fashion design and production. For another way to get a handle on "shops and services for lower impact shopping choices" explore this multi-borough GreenMap NYC below.

St. James also spoke frankly about the types of competitive edge and marketing impact associated with sustainable design and garment making innovations. While design innovators are starting to incorporate sustainability as good industry practice, and are seeing a rise in customer awareness, making this a new normal will take time. St. James alluded to a wrinkle in raising customer awareness via marketing or branding because of concerns that a rival company might raise criticism of what a sustainable designer or maker is not doing. As a result, often customers aren't educated on a brand's sustainable features.

Another wrinkle is that sustainable fashion still has to overcome a common perception that sustainability means ugly, not cool. Changes here will be critical because this is an industry dedicated to making the consumer look good, being good takes a back seat here. Sustainability in this industry won't really take off until consumers and CEO's insist on it.

Patrick Duffy, V.P., Sustainability, Manufacturing and External Affairs, with Manufacture New York (MNY) and I had a deep dive discussion about what the NYC fashion and design industry is doing and could be doing to advance sustainability-driven innovation. He sees a small, but vibrant movement emerging here now. Beyond NYC, there are national and international sports and active-wear and clothing brands such as Patagonia, Nike and Eileen Fisher that have adopted, or are adopting more environmentally sustainable practices.

The Sustainable Apparel Coalition (SAC) is an industry-wide collaborative effort to develop internal sustainability performance tracking metrics for the industry as a whole. According to Duffy, more standardized ways of measuring industry performance — similar to the LEED system for buildings — is needed for fashion and apparel to move forward more rapidly. Big Green groups like NRDC, EDF, Greenpeace, and others, have helped catalyze the industry by focusing on individual attributes such as toxicity (e.g. Greenpeace's "Detox" Certification Program), but a more comprehensive system with a broader set of metrics is needed for to achieve significant change.

Then there's the trash problem. According to "Pressure Mounts to Reform Our Throwaway Clothing Culture" Americans dispose of about 12.8 million tons of textiles annually — 80 pounds for each man, woman, and child. In the U.S. and around the world, a growing number of environmentalists and clothing industry executives say it's time to end the wasteful clothing culture and begin making new apparel out of old items on a large scale.

In NYC alone, one of the ongoing sustainability challenges for the fashion and garment sector is how to cut the fabric waste footprint. It's estimated that 200 tons of used (post-consumer) clothing is thrown away every year along with close to 700 tons of "pre-consumer" (post-production) fabric waste at considerable environmental and monetary cost. These costs add urgency to the zero-waste and up-cycling revolutions.

In the garment industry, fabric is purchased by the yard and until recently utilization rates (the percent of fabric that's converted into product) have "not been uniformly great" according to Duffy, while support to improve these rates and cut production waste have been lacking, as have markets for this unutilized fabric. From a "lean manufacturing" perspective, this is a failure although more technology is emerging to support leaner, greener pattern making and fabric utilization. But, not everyone is waiting to install these new technologies.

Local designers like Daniel Silverstein, are committed to clothing design and making that incorporates zero waste into the design and look of his line. For organizations like Duffy's, the goal is to weave sustainability into every aspect of its business model and promote these practices in local production. Little wonder that he characterizes sustainability as a "lens" to look at all dimensions of a business' operations and performance to help drive innovation at Manufacture NY's manufacturing, research and design center located in Sunset Park Brooklyn.

Anthony Lilore, self-described "warrior chief" at Restore Clothing has spent more than a decade reaching back into the clothing supply chain in order to recycle used fibers and make them into new fabrics and cut down on the industry's trash footprint. It's not easy and cost has been an on-going challenge, but he has been working with mills in the US to make textile reuse and recycling scalable in a way that will drive down production costs. Here is another opportunity to boost NYC's fashion and design climate-friendly profile.

The take-away from all this ferment for making an old industry new again is not that the goal's been met or is now well under way. Instead the take-away is that the metamorphosis has just begun and its prospects are still hazy. Wondering how to end this column, a last minute Internet search closed the loop for me when I discovered Made In NYC (MINYC). With its mission "to support a vibrant manufacturing sector in New York City" and a sustainability platform for manufacturers and consumers alike, it was a perfect fit to discover that fashion designer Yeohlee Teng was a founding member. 'Nuf said.