Omri Ben-Shahar concludes a scathing attack on contemporary disclosure laws with a barbed reference to a 400-word pronouncement, called the "Spanish Requirement". It was a prepared statement read in Spanish by 16th Century conquistadors to New World inhabitants, which warned them, having been put on notice, to "acknowledge the Church as the rule and superior of the whole world" or else!

While Professor Ben-Shahar concedes, "Happily, disclosures no longer excuse slaughter and slavery", he and his co-author Carl E. Schneider in More Than You Wanted to Know: The Failure of Mandated Disclosures, set out to make the case that today's disclosure laws, often called "sunshine" laws, are, at best, a waste of time because they fail to inform, warn or change anyone's behavior. At worst, disclosure laws shield bad actors from legal liability and let timid politicians hide behind the supposed virtues of enacting sunshine laws rather than passing bills to outlaw the behaviors that disclosure laws are supposed to help us see and thus avoid or amend. These are serious indictments, and as a long-standing supporter of New York City's very own sunshine statute, the Energy Benchmarking Law, enacted in 2009, I knew I needed to read this book with care. What if it's right?

Before answering that question, let's see how the authors make their case. The book offers a stream of hilarious and all too familiar examples of the opaque and mind-numbing "disclosures" that are ubiquitous in every day life. They range from the "agreements" popping up on computer screens every time there's a notice of the availability of downloadable content[1] to the HIPAA-mandated form that requires a signature every time a customer picks up a prescription from a pharmacist. Think party-of-the-first-part-scene in the Marx Brothers' A Night At The Opera.

Have disclosure laws whose purpose is adding to consumer protection succeeded? No, according to the authors, because people don't understand the information being disclosed. Raising the stakes further, the authors turn to the mandated financial disclosures that are part of the boiler plate in every home mortgage document and the disclosures pertaining to informed consent that are part of the agreement to joining a human subject medical research project. Surely, there's no debate over wanting everyone who's buying a house or consenting to become part of a medical experiment to know every material fact of consequence before signing on the dotted line.

But here's the thing, according to More Than You Wanted To Know it doesn't matter whether the mandated disclosure sets out information on something relatively trivial or something of possibly life-altering consequences. In both cases, most of us don't read a word, but just sign our names or click "agree". The attack on mandated disclosure laws is anchored on the reasonable claim that non-specialists cannot make, nor should they be expected to make, complicated decisions on unfamiliar matters that call for specialists' knowledge to understand. Disclosure laws may disclose everything, but they fail to communicate and inform. Admittedly, it's just about impossible to disagree with this indictment as presented. Why? because the book serves up great anecdotes. The myriad examples of disclosure material are so familiar that any honest reader must confess to having skipped or skimmed the boilerplate part of serious documents before signing on the dotted line.

But wait. An attentive reader might suggest making those risible and unread disclosures shorter, snappier and therefore more likely to be read and understood. Not so fast, write Ben-Shahar and Schneider. If the must-be-disclosed information is complex or multi-faceted, reducing it to something short and readable means sacrificing much of the very information that is mandated for disclosure. Even alphabetical ratings like NYC's restaurant rating system, where A is good but C is not, doesn't get any respect here because, according to the authors, research offers up conflicting evidence about whether the number of tainted food-related illnesses has declined since the law went into effect.

At this point, possible parallels with the EUI scoring system used by the EPA Portfolio Manager software required by the City's Energy Benchmarking Law began to worry me. This leads back to my question, what if More Than You Wanted To Know is right?

It might be right when it comes to the innumerable on-line or hard copy disclosures that have become part of the wallpaper of our lives. But it's wrong when it comes to the New York City Benchmarking Law. Here's why — and I thank the authors for this crucial insight about who makes use of fine print — specialists can and do make use of disclosure information in their fields of expertise for the conduct of their business or professional lives and they make good advisors to the rest of us. The authors demur only on whether access to such useful information must be achieved by mandate.

The people most likely to pour over the data disclosed by the Benchmarking Law and inform themselves about Portfolio Manager metrics like the EUI are those who have business, financial or professional stakes in the level of energy performance in New York City real estate. They are building owners or operators, occupants, investors, project architects and engineers along with policy makers who have skin in the game. The Co-Chair of the Committee on the Environment at the American Institute of Architects New York spells out support for the Benchmarking law in terms of its impact on multiple parties, "We view Benchmarking as an important first step in a process that leads to more energy efficient buildings. In addition to providing owners with the information they need to improve efficiency, more data will help to inform future metrics for performance. More data will help utilities to design useful energy efficiency programs." (Emphasis added)

Furthermore, with the publication of Benchmarking Annual Reports — BAR's (three to date), there is a well-written, publicly accessible lens that brings into sharp focus the characteristics, trends and significance of the data that's been disclosed.

With these reports and an audience of interested stakeholders, the "noise" inherent in reams of reported data has a high probability of being heard as meaningful, even actionable, "information".

Are there any caveats? Yes, today general public awareness of the existence, let alone the significance, of a benchmarking EUI for their home or office building is probably very, very low. There has been no concerted wide-ranging public outreach or education campaign on energy benchmarking. This also holds true for building managers or property owners who do not have a staff of trained building system operators to make energy performance changes. For them, filing their annual building energy and water use benchmarking data could be treated as just another box to tick off on the long list of paperwork required by a government bureaucracy. Again, the lack of public education and awareness is a problem, but a fixable one, especially as commercial and residential trade or professional associations step up to educate their constituents.

More education and awareness will build the capacity to make use of the information the benchmarking law discloses. In turn, this growing capacity will raise support for being able to access the kind of high quality information and analysis that BAR's provide. Knowing there is reliable information at hand then further increases the likelihood that BAR's and a building's own benchmarking data will be considered when it's time to make operating and capital decisions for their buildings.

Will every owner, whether of single properties or portfolios, and every occupant, manager or lender in the world of New York real estate become an avid reader of BAR's? Of course not. My position is not a triumph of hope over good sense! Will a close reading of BAR's put an end to red-hot discussions over how to compare building with occupants who have radically different energy profiles, say buildings whose occupants have intensive computer and data handling needs in contrast to buildings with low energy demand occupants? No, but over time these evidence-driven discussions can improve the methodology and metrics of EPA's Portfolio Manager software. Is it entirely reasonable to think that the NYC Benchmarking law is a mandated disclosure with a high probability of success, defined as spurring action to make buildings more energy efficient at a scale that makes a difference to the size of the City's fuel and electricity appetite? For sure.

[1]
I use the Apple "Terms and Conditions" page only as an illustrative example
http://www.apple.com/legal/internet-services/itunes/us/terms.html


Hi Nancy, nice column. I want to also offer another bit of support to the disclosure requirements:

I would argue that disclosure of unique bits of information, such as the energy performance of a building, has unique value to specialists who can analyze this information and use it to inform policy decisions. This is very different from generic disclosures of risk; in fact, I think they are different animals and maybe using the word "disclosure" for both of them is unfortunate. It might be better to call the energy benchmarking law a "reporting" requirement, since it requires reporting unique information.

We see this with campaign finance disclosure. We unfortunately have minimal regulation of campaign finance, but disclosure has embarrassed a lot of people and made it at least a little more difficult for political actors to act against the public good. (It may be hard to see this in a place like New York, unless we try to imagine a world without disclosure.)

Keep up the great work.

Since so many of us are asked to check the box on the same documents whether it be Apple, American Express or one of the myriad disclosures the law requires organizations and companies to release, it may be time for us to commit acts of disclosure dissection together as crowdsourcing projects. The iTunes terms that Omri Ben-Shahar and Carl Schneider reference as being thirty-two pages long may be daunting for one person but if thirty-two people read a page it wouldn't take very long to mark it up with comments on a site built collaboratively using wiki software. Rather than declaring themselves disclosure skeptics, why don't the authors upend the current paradigm by shaping methods to engender widespread scrutiny of mandatory disclosure information and foster public debate? 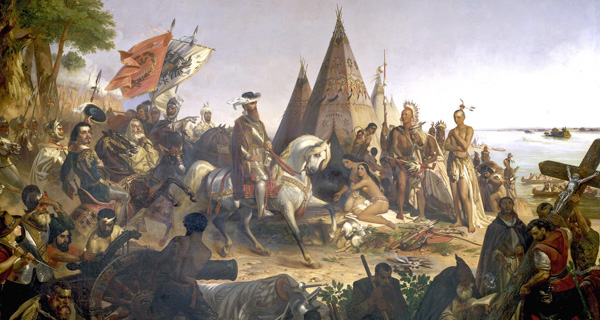 William Henry Powell: Discovery of the Mississippi by De Soto