Use The Future As A Reference

While a New York Times Editorial calls Mayor de Blasio's ambitious and sweeping affordable housing vision Housing New York: A Five-Borough, Ten-Year Plan, his "moon shot", I'd like to focus in on his plan's energy efficiency and resiliency ideas. Coincidentally, the day after the Mayor issued his housing report President Obama released the US National Climate Assessment and for a coastal city like New York, here's a finding that stands out:

"The American scientists said the rise could be anywhere from one to four feet, and added that six feet could not be entirely ruled out. Along much of the East Coast, the situation will be worse than the global average because the land there is sinking".

Although energy efficiency and resiliency ideas are not the headline grabbers in the Mayor's affordable housing report, they do get sketched in and this merits both applause and scrutiny. Why? As the Financial Times observes:

"Those most vulnerable to climate change include the elderly, children, the poor and the sick... Others are at risk because they live in floodplains, coastal areas, or urban areas where damage to one piece of infrastructure, such as the electricity grid, quickly has a knock-on effect on other essential services."

Sounds a lot like the risks facing New Yorkers.

Of course, since far too many New Yorkers also face the threat of rising rents, unaffordable housing and displacement, doubling up or homelessness, the urgency propelling the vision of Housing New York is undeniable. Mayor de Blasio is right, "We do have a crisis of affordability on our hands." My purpose is to identify opportunities where mitigating housing risks intertwine with mitigating climate risks and ending wasteful, costly energy sloth. Back in February 2014, I wrote:

"At a press conference announcing his picks for senior housing agency positions, Mayor de Blasio flagged the need for retooling public housing to make it energy-efficient... What the Mayor's engagement can do is scale up new construction and rehabbing of affordable homes to make energy efficiency and fuel economy the new normal. He can end forever the critics' claim that climate friendly, energy efficient housing is a luxury American cities can't afford."

Again, Mayor de Blasio is right, "Things must change." and here's what he intends to do.

"To help mitigate rising utility costs and preserve affordability, the City will launch a new program to target mid-size and small buildings—in concert with local utilities and existing subsidy programs—to incentivize energy retrofits in exchange for affordability commitments from building owners." This proposal would significantly extend energy efficiency goals beyond the 50,000 square foot threshold of the City's energy benchmarking and audit/retro-commissioning laws."

At the same time, the report observes the City could tackle the problem renters face with monthly utility bills that have risen 20% from 2002–2011. I look forward to program details. 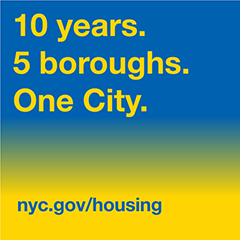 Housing New York calls repeatedly and accurately for planning and funding the infrastructure new housing development will require. While many kinds of infrastructure are entailed in new development, especially the new dense development envisioned in the plan, there is no mention of the electricity and natural gas energy infrastructure and what will be done to meet new demand reliably, cost-effectively and in a low-carbon manner. More work is needed here to define the Administration's position on developing microgrids or fostering more combined heat and power systems and how the state and federal government could assist in such efforts. The City's energy infrastructure has to be part of its affordable housing plans.

Housing New York is acutely aware of how little vacant land is available in the City for new construction and expects new waterfront development to be part of the picture. This will entail, as the report stipulates, that coordinated planning and public investment to build resiliency for coastal flood risks is a must. Again, the roll out of plan details may reveal how energy systems will be made more resilient in flood-prone areas and the ultimate success of the plan will hinge on fostering robust, sustainable critical infrastructure upon which the physical, economic and social resilience of our communities rests. It is encouraging that the de Blasio Administration will establish an "Existing Buildings Code Revision Committee" to address how to make housing more flood and wind resistant, among other things.

The linkage of housing sustainability and affordability comes to the fore in sections of the report addressing the preservation of affordable housing. Among its key strategies is, "Promote Sustainability, Resiliency and Long-Term Affordability While Helping Building Owners Reduce Operating Costs". Yes! The report suggests small landlords, "May benefit from training on best practices for maintaining their residential buildings… and from information about resources that are available to improve building performance and operating costs". The report also calls for creation of an energy and water utility cost-reduction program by way of building and equipment retrofits. It cautions, however, that too many buildings have not undergone even simple, low cost upgrades because owners lack technical understanding or lack the financial means. Accordingly, "The City will create a pilot outreach and financial assistance program to provide grants or loans, as appropriate, to accelerate investment in energy and water efficiency projects. The pilot program intends to target some of the oldest and most vulnerable housing stock, including smaller and mid-size tenement buildings." While this is a good start, the report does not set project participation goals or cost savings targets and misses the chance to make use of the City's existing energy benchmarking database to help target low-performing, vulnerable buildings larger than 50,000 square feet.

Still it's early days. Let's see, what the de Blasio administration — making use of existing programs undertaken by the federal government like the Franklin Plaza Mitchell Lama development with 1,634 unit of affordable housing undergoing both general and energy performance rehabilitation in concert with outstanding local innovators like Enterprise Community Partners, Green Light New York HDC and the New York City Energy Efficiency Corporation, NYSERDA, Con Ed and National Grid — will do to enable property owners to cut utility and fuel costs while improving energy performance, thereby saving themselves and their tenants real money.

The administration affirms that it wants to go green, so let's judge it on its forthcoming accomplishments. Housing New York commits "to building sustainable affordable housing communities". Since the City has already adopted the well-respected Enterprise Green Communities Criteria, which reflect a "commitment to green and sustainable affordable housing", for renovation work supported by the Department of Housing Preservation and Development, now is the time to make these type of standards mandatory for all new and preserved residential buildings. Absent such requirements, the problems of affordability, unnecessary energy consumption and carbon emissions will remain chronic.

For right now, here's one proposal to harness the myriad demands for real world innovation created by Housing New York and to stimulate real-world sustainability ideas, ideas for doing better than we do today. Sallan calls on Mayor de Blasio to sponsor an annual contest for the best energy performing housing. New Yorkers love to compete and they love to be winners. The top buildings and residents can reap symbolic awards and tangible benefits. Let's use the future as a reference — not the past!