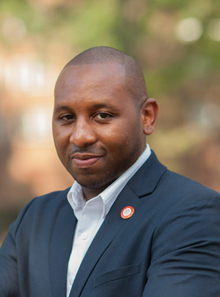 Shortly after Superstorm Sandy wreaked its havoc on New York, Donovan Richards won a special City Council election to represent the super-soaked residents of southeast Queens. In January 2014, his Council colleagues tapped him to become Chair of the Environmental Protection Committee. Talk about being fast-forwarded into the center of urban climate change and resilience politics!

I caught up with Council Member Richards in March to find out about his vision, the mission and a legislative agenda for his committee. With his new citywide responsibilities, our discussion started at his plans for representing his southeast Queens constituents, with their Sandy recovery and resilient infrastructure needs along with their concerns about the health impacts of air pollution. He spoke at length about how these concerns interface with the environmental and climate needs of the entire City now that he will be leading environmental legislative and oversight initiatives.

As a perfect example of how district-level and citywide issues can interact for Mr. Richards, he emphasized seeing first-hand when Sandy hit just how ill-equipped local sewer and storm water controls were in low-lying southeast Queens, a neighborhood with chronic flooding problems. In his assessment, the City could have had more infrastructure in place, knowing how vulnerable to flooding this part of town was. In the same breath, Mr. Richards energetically praised the PlaNYC A Stronger, More Resilient New York report issued in 2013 as a 430-page roadmap to creating urban systems for the entire City capable of meeting 21st century challenges.

Delving deeper into the impacts of flooding and a climate-changed future that promises more severe storms, higher sea levels and inundation, the Council Member highlighted the air-pollution created by flooded boilers that have lead to siting "temporary" diesel-powered building boilers at New York City Housing Authority (NYCHA) building complexes, three of them located in his district, still in use almost a year and a half after Sandy. The pollution from diesel-fired boilers harms both outdoor and indoor air quality and tiny diesel fuel particles get breathed deep into residents' lungs, posing added health risks. This means on-going temporary relief efforts could be adding to Sandy's human toll and Mr. Richards is determined to cut the cost of this toll on the environmental justice communities in harm's way when Sandy came ashore.

He intends to hold hearings to obtain air-monitoring results linked to these boilers but also expresses real concern that, at present, his district has only two such monitors. He also anticipates conducting oversight hearings on NYCHA's continued use of #6 heating oil, since it is exempt from the mandatory phase out of this dirtiest home heating energy source; clearly, this has citywide implications. And speaking about taking action on indoor air quality, could a bill to ban indoor residential smoking be in the offing?

Further, Council Member Richards wants to make sure that Sandy-recovery money is spent wisely, well and accountably. He authored a Sandy funding-tracker bill, with an informational update due in April 2014. Since he also sits on the City Council's Recovery/Resilience Committee, he expects to work on speeding up assistance for residents still hurting from their Sandy losses. Looking to the future, he vigorously rejects the vision of a New York retreating from its waterfront, instead, wanting its nearly 500-mile long shoreline to be made resilient and sustainable. 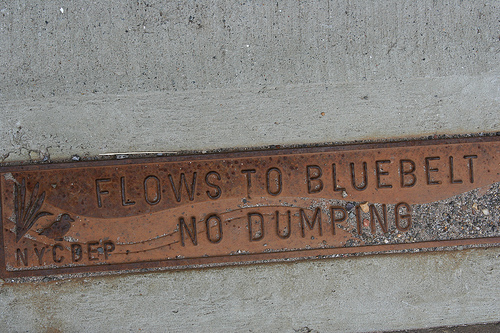 As for Mr. Richards' targeted agenda items, energetic enforcement of the City's environmental protection laws must be ensured and he cites enforcement of vehicle anti-idling laws as part of his clean air and healthy community agenda. He also is concerned with other chronic sources of air pollution in southeast Queens coming from the JFK Airport and wants to see the City work more closely with the Port Authority, JFK's owner, to cut emissions arising from its operations.

Turning to other important areas of environmental protection, Council Member Richards lays out the possibility for greening our urban infrastructure by way of requirements ranging from new standards for relocating critical building systems up and out of harms way in flood zone properties to installing green roofs to absorb rainwater and help ease the burden on the City's sewer system.

Better maintenance of City catch basins, which are designed to drain storm water from streets and corners, will do a lot to improve daily life and he is concerned about vital equipment like DEP's ground water pumping stations that break down but don't get repaired due to a lack of funding. The Council Member envisions making a request for the Comptroller to audit DEP to see how to increase agency operating efficiency to help makes its budget dollars go further. Too often, what the City's been able to offer are "Band-Aids", for its infrastructure problems but what's needed are "solutions"

He advocates installing both more conventional infrastructure and greener infrastructure — like the Blue Belt storm water control systems used in Staten Island — in other flood-prone parts of the City. Closer to home, Rockaway beach restoration and bulkhead repairs also are high on his to-be-done list. Returning to the broad view, he wants to make sure the City does more to mitigate the impacts of climate change. He also stresses that rapid and complete implementation of many of the City's recently enacted green laws will be crucial for preventing future flooding of New Yorkers homes.

Pivoting on resilience and air quality, the Council Member segues to the need for New York to ramp up its renewable energy resources; he sees the Rockaways as a great location for rooftop solar panel projects. To advance this idea, he cites the importance of amending Fire Department rules that make it difficult to install solar panels, while seeing a real opportunity for installing solar panels on NYCHA buildings and a similar potential for using the rooftops of City University buildings. In Mr. Richards' vision for urban sustainability, the City should use its own buildings to lead America's cities on the path to wide-scale use of renewable energy.

In addition, Mr. Richards sees renewable energy, especially when it's locally created, as a reliable way to keep the lights on in the wake of natural disasters or system-wide power failures. Today, medical science knows that summer heat poses health risks for vulnerable populations, especially the elderly, which means that reliable air conditioning and easy access to community cooling centers is about more than being cool. These days, New Yorkers know more than enough about the consequences of black outs and that it's time to pre-empt any repeats.

Then, pivoting back to lessons learned from Sandy and how to build on environmental protections the City already has in place, Mr. Richards links the risks posed by hazardous materials in case of storm flooding and their environmental justice impacts on the City's waterfront communities. Again, he cites the importance of legislation in concert with enforcement to mitigate such risks. An updated Right-to-Know law would mandate better, safer storage requirements for dangerous substances commonly stored in industrial facilities and warehouses. For Mr. Richards, communities have the right to know because the price of inaction is far higher than the cost of doing something. Finally, when Council Member Richards weighs climate costs and benefits, the idea of a local carbon tax starts to look very attractive.

Add up all these ideas and a vision for a climate-friendly, resilient and healthful city that protects all its residents starts to take shape in Council Member Richards' aspirations for the work of his committee on behalf of New York City. Stay tuned.