At the risk of trivializing Walter Benjamin's musing on world history: 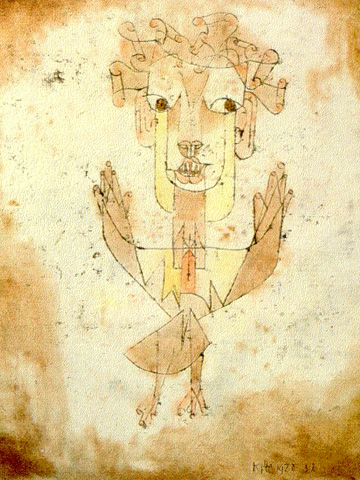 "A Klee drawing named 'Angelus Novus' shows an angel looking as though he is about to move away from something he is fixedly contemplating. His eyes are staring, his mouth is open, his wings are spread. This is how one pictures the angel of history... But a storm is blowing from Paradise; it has got caught in his wings with such violence that the angel can no longer close them. The storm irresistibly propels him into the future to which his back is turned, while the pile of debris before him grows skyward. This storm is what we call progress."

I want to report on what progress I found when looking over what Sallan readers read most in 2013. It could be that by looking back, we — readers and publisher alike — can also see ahead; at the least we can remember what we've just been through. That seems like a worthwhile effort for my final column of the year.

Readers over the year consistently clicked onto a summary of a Sallan Smart Grid conference panel that addressed concerns about cyber security back in 2010. In 2013, revelations about NSA snooping and the awareness that there is no on-line privacy, gave this item "legs" and a twist that was not apparent three years ago.

Although I don't have an angel of history handy, Sallan's Wrap Up report on "Not Your Grandma's Infrastructure" conference, held just a month before Superstorm Sandy, has become a resource in the rising advocacy for microgrids and other means to decentralize the systems that generate both heat and power in a world where climate chaos is becoming the new normal and centralized infrastructure systems, resting on century old models, have demonstrated their vulnerability, literally, to the stormy winds of history.

2013 was a good year for Sallan special reports. The Friends of Benchmarking First Year White Paper, posted in 2012 has endured as a much-read resource to advance useful knowledge for greener cities and the new Second Year White Paper is attracting reader attention. Companion resource materials, like the City's Annual Benchmarking Report, have also been consistently downloaded through the year.

Sallan's bi-monthly "Snapshot" guest columns, each with its own voice and message, are among my favorite postings. This year, Ken Levenson's update on the Passive House movement and its use of the blower test was a hit as was Chris Benedict's manifesto on how to work at the cutting edge of green, affordable urban architecture. Tom Bourgeois and Bill Pentland's deeply informed essay on New York State rule-making to encourage the development of a climate resilient distributed power supply system excavated some of the complexity entailed in modernizing a century of utility regulations. Snapshots are meant to capture moments in time for practitioners, observers and critics of today's urban sustainability campaigns. Will next year's Snapshots display continuity or ruptures with today's emerging positions and practices? Visit our website and find out.

It was also a good year for discovering what was useful knowledge for greener cities back in 2011, remains current. Site visitors are still clicking on the mini-site featuring a Wrap Up of our Market Makers panel series. The premise then, and continues to be, was that adapting New York City's legacy building stock to 21st-century requirements is the energy efficiency task before us. It is made increasingly urgent as climate change accelerates, energy debates heat up, and a volatile economy makes energy savings matter more. Not surprisingly, energy-related subjects now figure in many real estate-related plans and promotional materials.

But ideas are one thing; actionable ideas may be another. How is the market actually responding to new realities? To gauge market response, experts on energy-efficiency technologies, electric utilities, financial innovation, and real estate trends reported on their own work and shared broader insights. While my co-sponsor, Micah Kotch of NYU-ACRE and I shared the sense of momentum that panelists conveyed was palpable. We also agreed that their acknowledgement of obstacles was sobering and remains so today.

Speaking of actionable ideas, readers flocked to the Deutsche Bank Americas Foundation's nuanced report on energy retrofitting projects in New York City apartment buildings, "Recognizing the Benefits of Energy Efficiency in Multifamily Underwriting". Its goal was to encourage the financial industry to scale up financing of building energy efficiency retrofits in the belief that "private capital, if deployed for retrofits, could prove transformational in achieving significant carbon reductions while upgrading multifamily buildings and stimulating much-needed job creation." As well, readers downloaded a visionary Urban Green Council paper on paths to cutting the Big Apple's carbon footprint 90% by 2050 and Green Light New York's "Let There Be Daylight", a study of how to achieve steep and durable cuts in office tower energy consumption by capturing the power of natural illumination.

Cheers to Sallan readers and their dedication to the long form! I do hope they have found these and other cutting edge reports on the built environment, along with the challenge of shrinking the urban carbon footprint, to be useful and applicable knowledge for greener cities.

I want to thank you readers for validating my sense of having accomplished something since launching this website in 2005. Like Klee's 'Angelus Novus', you and I can only see the past while being blown by gale force winds into the future. It's the human condition. If you've found Sallan's web presence to be instructive, prescient or provocative, please visit us regularly in the New Year because it's fair to say, we're all in this together.