If you are reading this column, you probably know that the Sallan Foundation is a friend of New York City's building energy performance benchmarking law. Now that the City has collected the first comprehensive round of data from large commercial and residential buildings, published a thirty-six page annual report, (the first of the three that are legally required) along with a nuts and bolts spreadsheet replete with data submitted by commercial buildings, it's time to take stock. 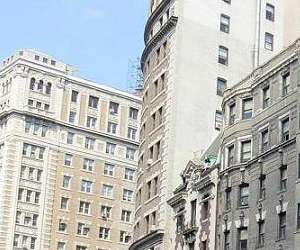 Since there's no place like home, I wanted to take a look at the benchmarking form prepared on behalf of my building, which opened in 1918. As a friend of benchmarking, I know my building has to submit benchmarking information to the City. I also know the data is collected using EPA Portfolio Manager software. Unfortunately, this software was not developed with multiple-unit dwellings in mind.

That said, I also know the Energy Utilization Index (EUI) numbers reported in Portfolio Manager, should be instructive and the City's annual report contains a histogram chart that aggregates residential building data and makes it comparative. The fundamental principle of New York City benchmarking is that the obligation to gather reliable data about a building's energy use will make building owners, managers and occupants more cognizant of this aspect of operations and expenses and therefore more likely to adopt reasonable efficiency-enhancing and performance strategies. In addition, EUI scores make comparisons to similar types of buildings easy to do.

So, is my apartment building an energy sipper or a slurper? Before I tell you, some back-story. Benchmarking's sunshine premise — knowledge is the salutary motor of sensible action — makes a leap of faith that may be unwarranted. Yes, my building's managing agent dutifully gathered energy data, did the necessary calculations and submitted them in a timely fashion to the right City agency for the calendar years 2010 and 2011. And yes, when specifically asked by the co-op board president, the managing agent promptly provided copies of the Portfolio Manager forms. So far, so good. But, if I had not asked the co-op board president for the submitted forms, would the board have seen them or had the opportunity to make sense of them? Not clear.

Now for the sipper or slurper numbers. The "site" EUI for my building is a spectacular 63. In comparison to the City's calculation that the average EUI for reporting apartment buildings is 132, I'm living a star energy sipper, pretty great for a ninety year-old building that has none of the bells and whistles of modern green construction!

But wait — I know that an EUI of 63 is spectacular, but what about my co-op board? What about my neighbors? Without some explanation and frame of reference, how could we expect that the legal obligation to annually file the Portfolio Manager form with the City be an engine of behavioral change, building upgrades or market transformation? For the present, I do not know.

Let's continue stocktaking by zooming out to the big picture of citywide building energy performance. New York City's benchmarking program is being emulated and providing a model for cities like San Francisco, Seattle, Washington DC and Philadelphia and they are keeping close tabs on our data gathering and analysis. People responsible for the City's benchmarking program are hearing from local real estate portfolio holders and university campuses that the first round of benchmarking filings are starting to have significant impacts on their own efforts to gather data, understand energy use and ways to become more efficient. Academic researchers and private consulting firms are also eager to dive into this deep data pool, by far the largest yet gathered in the US. Before the City published it's first annual benchmarking report in August 2012, experts from New York University and the University of Pennsylvania were given access to the raw Portfolio Manager data and they combed through it both to identify patterns and trends and to weed out building data submissions that were clearly so flawed as to be useless.

Everyone agrees there's a learning curve in operation, but already, there's a wealth of information and comparisons in hand. There were, unsurprisingly, a few glitches in this first reporting cycle. For instance, Portfolio Manger calculates energy performance based on a building's square footage. However, New York City's Department of Finance does not include basements when calculating that number. This disparity obviously throws off any energy performance calculation. As of now, there's no fix for this glitch.

On other hand, when the City first released the spreadsheets containing benchmarking data for commercial buildings in September 2012, some of the largest buildings that had filed their Portfolio Manager reports were missing from the database. As soon as the City was alerted, the source of the problem was identified and a revised spreadsheet was released. The City is now organizing an expanded research team that will have access to next year's raw data for assisting in the preparation of the annual benchmarking report due out in 2013 and release of the next round of data spreadsheets, which, for the first time, will include apartment building data.

What else can we expect? The need for better ways to report and compare the performance of multi-unit dwellings cannot be ignored. The US EPA is working with the federal mortgage giant FANNIE-MAE to get better data and the Department of Energy is also developing standardized building energy performance protocols. The DOE effort would allow building energy information to be systematized into broad national data sets useful to researchers, financiers, engineers and other experts.

Some experts are hoping that future reports will require information on building occupancy because two buildings of the same size and use, but with different vacancy rates cannot be compared for their level of energy performance. So too, some would like to see data that would easily allow for comparing the energy use and rankings of LEED-rated buildings to others. Others are seeking to refine Portfolio Manager data in ways that will be of greatest use to underwriters and real estate financial institutions. The ability to capture and monetize the value of energy performance should make a great contribution to the greener greater building plans of New York and other cities around the nation. Finally, City government is considering an amendment to the 2009 Benchmarking law that would require benchmarking annual reports to be issued every year going forward and not just for the first three years of the program. Seems like exactly the right thing to do.

Comments | Taking Stock of Benchmarking October 19, 2012
I second your point that the benchmarking law is a great success, but agree that if the intent of the law is to encourage behavioral change, then buildings, and more importantly those who manage and run them, must be able to use the EUI numbers in a way that encourages a "race to the top."

In my opinion, that means that (1) the information mandated by the law needs to be explained in a way that makes sense to people, (2) this information should ideally be disseminated to every tenant/owner in a building, (3) the city should work with the lowest performing buildings to encourage them to become more efficient, and (4) buildings that perform well should publicize this to gain a competitive advantage in the marketplace (which will have the added benefit of encouraging poorly performing buildings to improve).

October 29, 2012
I certainly value benchmarking buildings as outlined in your article of October 10, 2012. This data will be a resource for future researchers (perhaps PhD students) possibly leading to some astute observations about how energy is used in different structures. Also those of us who have performed many building benchmarks are well aware that in most cases older structures perform better than newer ones as you observe with respect to your 94 year old apartment building.

However, from my prospective unfortunately I don’t think benchmarking per se will reduce energy use. The reality is that just as there is no incentive for an individual apartment dweller to change their energy consumption habits (unless prompted by their utility bill), there is not much inducement for the owner of a commercial office building to improve their building’s energy performance as a result of benchmarking. A low benchmark rating will have minimal impact on the value of a commercial office building since the most important attributes are: location, rent roll and to some extent architectural design.

Any reduction in energy generally pales by comparison to an improvement in the rental dollars per sq. ft., which is why many landlords spend significant funds for a new lobby as opposed to an infrastructure upgrade. We are currently designing a new central heating, cooling, air conditioning (HVAC) system on one older large prominent midtown building to replace decentralized equipment. This change will improve the attractiveness of the property significantly since the current (air cooled) equipment removes valuable perimeter fenestration area from tenant spaces, which is not the case with a centralized approach. As a result, the new HVAC design will increase rental rate and modestly reduce the energy cost. However the savings in energy when the new system is fully installed amounts to at most $0.33/sq. ft. whereas the anticipated increased rental is $2/sq. ft. $3/sq. ft., a 6 to 9 fold difference, significantly more. Furthermore in many buildings the operation of the HVAC equipment is paid directly by the tenant.

All is not lost however since there are other market forces other than benchmarking influencing energy use. Some of these include; meeting LEED criteria, which requires a minimum Energy Star energy efficiency rating, financial incentives by NYSERDA or Con Edison or compliance with the latest energy codes. Some major corporate good citizen tenants have announced to landlords that unless the building meet LEED criteria, they cannot lease in their property. This has pushed the upgrade of properties and will be eventually memorialized through the benchmarking process.