Till Human Voices Wake Us 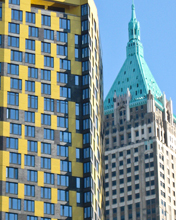 I am a lifelong New Yorker and I work in lower Manhattan. Perhaps that's why Rising Currents: Projects for New York's Waterfront, an exhibition at the Museum of Modern Art haunts me. Rising Currents imaginatively grapples today with a not-too-distant future of sea-level rise resulting from global weirding, more delicately called global warming. It offers "new ways to occupy the harbor itself with adaptive 'soft' infrastructures that are sympathetic to the needs of a sound ecology... to dramatically change our relationship to one of the city's great open spaces." [i]

While lower Manhattan is just one of five "zones of intervention" in the exhibit, it's the area I can explore just by walking out of my office. Lower Manhattan, "Zone 0", contains some of the densest building development in the world and has recently morphed from a strictly-for-business area into a mixed-use neighborhood. People are living in new apartment buildings, clustered in Battery Park City, as well as in early 20th century office buildings converted to residential use. Most of this development is very high priced, even by New York standards. While the Sallan Foundation is an advocate of making high performance, energy efficient buildings New York's new normal, we have long way to go, and even the concentration of LEED-rated buildings in Lower Manhattan stands as little more than a poster child for what's possible. And just to be clear, the benefits of making high performance building the new normal extend well beyond cutting our carbon footprint by reducing energy consumption. Those benefits include a reduced burden on a strained electric power system whose substantial expansion would cost billions, reduced reliance on the tricky politics and economics of fossil fuels, local economic development stimulated by new products and skills and markets for greener real estate and higher market and rental values for such properties.

But real estate is not the only part of Zone 0's chiaroscuro portrait. Inviting parks ring Lower Manhattan, even though they've got more pavement than grass or turf and it's a part of the city where ferries and terminals cluster. Downtown is home to the Stock Exchange and nearly all of the City's subway lines come here. If severe rain or storm surges start to regularly flood the subways and disrupt the telecommunications systems that lie just underground, New York along with much of the global financial system would be brought to its knees. None of the elaborate post-9.11 security measures would do a thing to stop the inundation that is surely coming in the next few decades.

Since there is little reason to be optimistic that atmospheric carbon dioxide levels will be cut to 350 ppm during this century, we can only become a sustainable and resilient city by focusing our vision and mobilizing our imagination, energies and resources, starting now. Rising Currents, which appeared to be a hit at MoMA, is one of those starting points. It foresees: 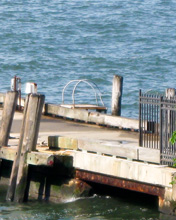 "Adaptive design strategies deployed here would include increasing the height of the existing sea wall to prevent inundation. Peripheral land may also be reconsidered a wetland zone, and sloped fill may be built up against the seaward side of the seawall. Channels and slips may be extracted from streets that were formerly inlets to allow water to move inland in a controlled way. The shallow areas just south of Lower Manhattan are a potential site for a protective offshore archipelago of artificial islands."

This vision assembles resources from new and old sources alike, ranging from the installation of up-to-the-minute geotubes to create sloping shorelines that would slow the landward rush of stormwater to using decommissioned subway cars to construct artificial reef habitats in the harbor. These subway reefs would create 800 to 1,000 times more biomass than the open ocean while deflecting "strong sea turbulence". On high Rising Currents recommends lightweight soils that could be used for green roofs to absorb rainwater that otherwise would overwhelm the sewage treatment system. Beneath our feet, porous pavements could also soak up storm water and reduce the need for large and costly, engineered water retention devices now deployed to protect New York Harbor from pollution.

In more bureaucratic prose, the PlaNYC Progress Report 2010 sketches a three-stage approach to bolster the City's resilience to the future impacts of climate change. It places special emphasis on creating up-to-date floodplain maps, working with vulnerable communities and rethinking zoning regulations while also devising a broad approach to minimizing the vulnerability of infrastructure systems to storm surges, flooding and higher sea levels. This is a daunting task in light of projected sea level rise ranging from 12 to 55" above current levels. The 2010 report of Green Building Codes Task Force also weighs in on planning for climate change by incorporating flood risks into new building standards. For example, the report recommends study of how to make buildings better able to withstand the loss of electricity or interruptions to water and sewer services.

Obviously, planning for a resilient New York will require sustained diligence and significant investments over the span of decades. Easy? Of course not, especially now. Consider America's inability to pass comprehensive climate legislation, its economic insecurity and the rise of the Tea Party with its flagrant anti-government fulminations. Taken alone or together, these events point to rough times for adapting to a hotter, wetter world because success will require large-scale government actions, rule making and expenditures. [ii]

As Mark Lilla notes in The Tea Party Jacobins, the American public, across the political spectrum, is "inspired by the same political principle: radical individualism." To this add the Tea Party as it rages "against just about anyone thought to be above, Democrats and Republicans alike." While this version of us-against-them is a staple of American populism, Lilla sees something different in today's populism. "It fires up emotions by appealing to individual opinion, individual autonomy and individual choice all in the service of neutralizing, not using political power. It gives voice to those who feel they are being bullied, but this voice has only one, Garbo-like thing to say: I want to be left alone." If he's right, what this will mean in the face of global weirding, we are surely fated to discover.

We have lingered in the chambers of the sea
By sea-girls wreathed with seaweed red and brown
Till human voices wake us, and we drown.
— T.S. Eliot

[ii] Gary Yohe argues that resilience should be examined in terms of "adaptive capacity", which entails the availability of "social and political capital, the ability to manage risk, the ability to separate signal from noise in support of response decisions." Resources For the Future pp. 38-39

[iii] Just as this Torchlight was ready for posting, the New York Academy of Science issued Climate Change Adaptation in New York City