Thumbing through a recent issue of The New Yorker magazine, I was riveted by the full-page ads trumpeting "A Planet of Smarter Cities" courtesy of IBM, "You have the chance to power your own city" as Chevron introduces its online game called Energyville, and "1 billion people to feed. A changing climate. Now what?" Monsanto muses. "If 41 MPG doesn't charge you up, its battery will" Ford assures me. Of course, this is advertising tailored to attract a New Yorker reader, but the sociologist in me was alert to the cultural status signal that climate change and energy brightly blared across glossy magazine pages. And it's a signal with value for right now.

So, what is New York doing right now, to capture this value? A summertime posting on the City's own website calls for volunteers to paint 5–10 roofs in Long Island City a cooling white. OK, what else? The Greener Greater Building Plan exhorts New Yorkers, "We need your help to GreeNYC. New York City can't reach the target of reducing carbon emissions by 30% by 2030 without you. You can make a difference. We all can. By following some easy tips, you can save money while you save the environment, and make New York City a healthier place to live." Scroll down the page to find tips to follow about smarter use of air conditioners. 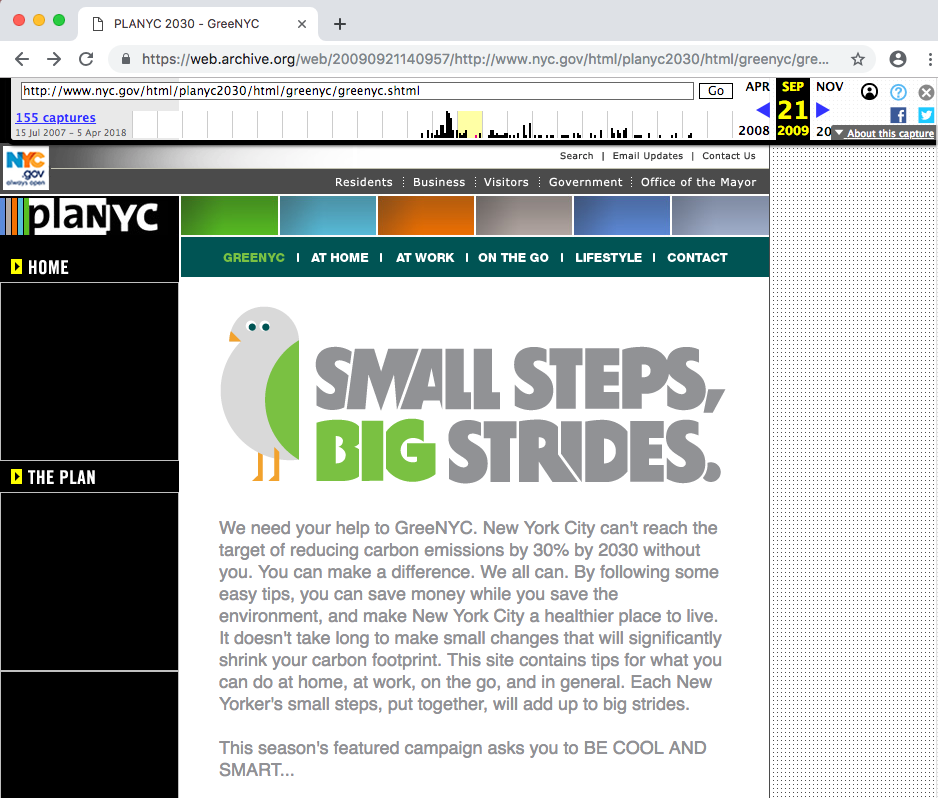 Reasonable, but compare this to the wealth of climate and energy-efficiency consumer information found on a London website dedicated to the Mayor's low carbon zone initiative. Want more information about energy saving washing machines, the best way to insulate your home, or a do-it-yourself home energy audit? It's there. A tour of London's website makes it clear that New York City government can be doing much more to help its residents GreeNYC. 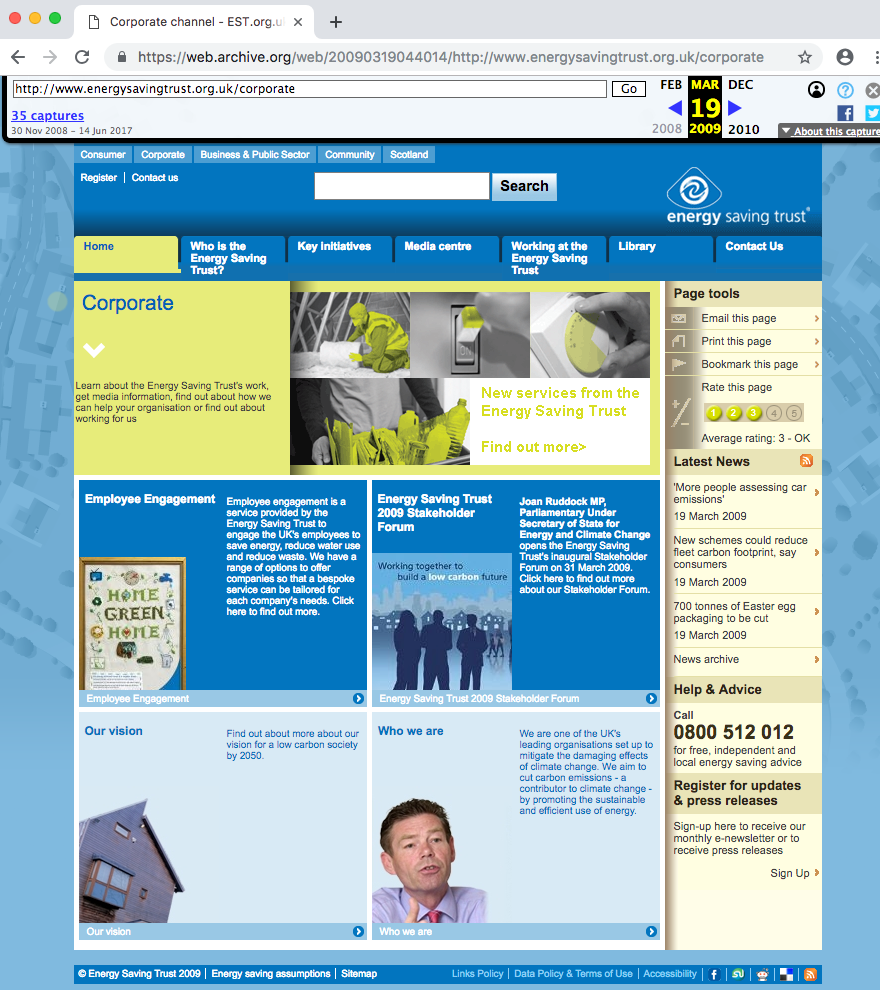 What else is the City doing? The annual progress report on Local Law 86, the 2005 statute that requires the City to green its own construction, is due out in November. For the moment, the latest sign of the progress in the City's effort to "lead by example" by upping the energy efficiency of municipal buildings is its Request for Information related to the search for a firm to design, install and maintain solar power systems on the rooftops of City-owned buildings. This kind of search suggests that solar panels won't appear on municipal roofs any time soon. Granted, it takes time for government to undertake something new and get it right, but PlaNYC was launched in April 2007 and money is there now to green light work on City-owned properties. Success in efforts that take less time to start up, like training building operators to conserve energy and establishing incentives for improving building efficiency — efforts that would have year-in-year-out paybacks — would be smart investments because even with extended term limits, time will run out for this Administration.

As Torchlight readers know from previous columns on "the deep green quartet", the most ambitious product of PlaNYC is the package of four bills introduced in the City Council at the request of Mayor Bloomberg. The major element of what is dubbed the "greener, greater building plan" by the Mayor's office, this legislation aims at transforming the energy efficiency standards and the demand for energy efficient buildings for thousands of New York's standing structures. After lengthy public hearings in June, negotiations over the legislation are still taking place exclusively behind closed doors, so what the final content will be is impossible to say. Still, word is to expect a City-Council vote this fall.

In the meantime, building professionals debate the energy efficiency and climate-change fighting contribution of LEED-certified buildings. A recent multi-part article in New Solutions argues that that truly climate-friendly buildings do cost more to construct, but over time will save money by using much less energy to operate. As well, other experts continue to write about the importance of measuring and verifying the energy efficiency of buildings that call themselves green. Some of these buildings are not making the grade. For example, a federal building in Youngstown Ohio is proving to be an energy-hog. Had it been a privately owned building, such information might not have come to light and now, the US Green Building Council is revising LEED ratings to require all new buildings to provide several years worth of energy and water bills. But as one knowledgeable wag said, "The plaque should be installed with removable screws, once the plaque is glued on, there's no incentive to do better."

Despite setbacks and reservations, or perhaps because of them, the best design, construction and operations practices are rapidly evolving while approaches to energy auditing and performance standards are also the subject of intense professional and regulatory interest. After all, what get's measured gets managed and today locally and nationally, the market for energy efficient building is on the rise. New York's Empire State Building and Chicago's Willis Tower are just two of the most iconic older buildings that are going green. Mayor Bloomberg's pending legislation would require property owners to amass and file data on their buildings' energy efficiency to create a benchmark. More complex audits would also be required. The great benefit of these efforts would be to provide a body of information, based on experience, not theory, to owners, developers, banks, insurers and tenants about the real value of high performance buildings. To go a step further than the current bills go, New York City should have a law that requires owners whose buildings fall into the bottom quartile of energy efficiency to develop plans to upgrade their performance.

As is the case with virtually any law, budgeting, implementation and enforcement will prove to be the strong links or the weak ones in meeting intended goals. Whatever the specifics of the final legislation, the NYC Department of Buildings will be responsible for its success. Public attention must remain keen to see if the Department will have enough plan reviewers trained in the specifics of the Energy Efficiency Code and a field staff able to carry out new responsibilities on top of such urgent obligations like heat, lead paint or elevator safety inspections. And that's just the half of it. As I've written before, based on the draft legislation circulated last spring, the specific penalties for violating the provisions of the deep green quartet are hard to figure out. Other provisions of the Building Code require the signature of architects or engineers who are licensed to practice by the State of New York. The possibility of losing this license in relation to false filings is said to foster rigorous compliance with Code standards. But in the case of compliance with provisions of the Energy Efficiency code for building retrofits or alterations, where often a contractor works without architects or engineers, the presumed guarantor of full compliance is murkier.

And of course, the business of government and the business of business are slower and messier than the utopias of advertising. But those New Yorker ads articulate exactly what some of the world's best-known corporations think that we aspire to. And now New Yorkers have the chance to do something more than hope.

It turns out that Energyville, a SimCity-like game but without the need to maintain the happiness of its citizens, was developed by The Economist Intelligence Unit, built by Mediaedge:cia and paid for by Chevron back in 2007. 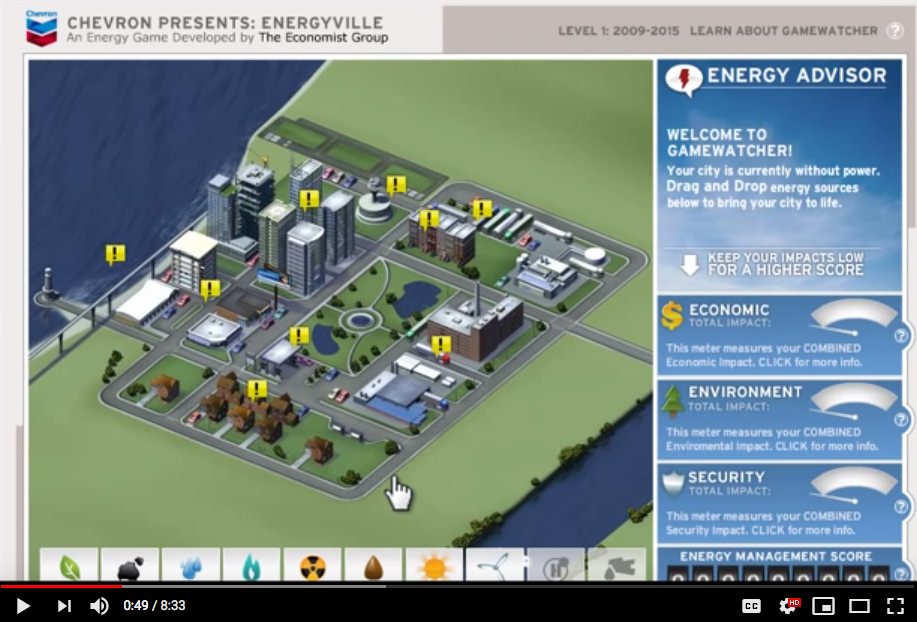 Why would Chevron take out a full page ad in the September 21, 2009 Issue of The New Yorker to promote an interactive online game that launched two years ago?

Pointing my browser away from the simulated environment of Energyville and out onto the world wide web, I found some news items regarding Chevron's business practices which may result in a significant loss of market value for the supermajor oil company.

Should Chevron lose before the Permanent Court of Arbitration in The Hague, perhaps they should be told to retool Energyville to include both the happiness of the people who are the end users of their product and the people who are living at the point of extraction. For those amongst us who actually spent untold hours playing the real SIMCITY 2000 when it was released back in 1993 — the same year the lawsuit was originally filed, we know the well being of citizens was built into the game.