The Role Of Media For Advancing Discourse On Climate Change

Most people are well aware of the global shift that's been taking place in mass media over the last decade. The factors contributing to the decline of trust in the media are many, and include the rise of internet and social media that allow readers to seek out information sources that only confirm what they already believe, decline of local journalism and a prevalence of special interests that control what journalists can report on, all of which contribute to a general public that is confused about where to turn for accurate, unbiased information about global issues.

Public perception of climate change is especially vulnerable to shifts in media because it is a complex issue fraught with political polarization. Researchers at the University of Colorado Boulder have found that the media has an influence on environmental processes, including policy and informal public understanding about the environment.

According to research by the Knight Foundation, Americans are finding it more difficult to be well informed and determine accuracy in the news today. They think that the media has a critical role to play in informing the public but don't know if that role is being fulfilled. National TV news and local and national newspapers are Americans' most trusted sources about current events. Overall, two-thirds of adults in the U.S. still rely on the TV for news, although it varies by age — people under 50 prefer to get their news online, including from social media. Given the number of Americans using mass media to obtain information and form opinions, the Fourth Estate has a significant role to play in telling accurate, compelling and motivating stories about climate change. Without factual, frequent and timely media coverage of this issue, solutions cannot permeate public discourse and have a chance to effect meaningful change that ultimately leads to dramatic reductions in greenhouse gas emissions.

The majority of journalists pride themselves on upholding professional norms such as fairness, accuracy and objectivity. In the past, the inherent complexities of reporting on climate change left many credible news outlets struggling with how to tell the story. Climate change requires at least a basic understanding of climate science, economics, politics and technology to accurately cover. That, coupled with a decline in specialized journalists that covered the environment in the early 2000's left many news outlets without a specific reporter to cover the issue.

Additionally, the common journalistic practice of telling two sides of a story, combined with sophisticated efforts from the fossil fuel industry to present disinformation, led many journalists to frame climate change as a debate about whether or not it was occurring, which further sowed doubt and misunderstanding. Finally, in an increasingly 24/7 news cycle where media outlets thrive on breaking news, climate change was not deemed urgent enough to warrant airtime. In the past, these combined factors resulted in climate change coverage that was (with some exceptions) inaccurate, spotty and irrelevant to the issues the general public cared about.

Ultimately, and as 21st century weather events make clear, people must understand how these climate disruptions impact their everyday lives. Social science confirms this. Americans need to know how climate change is impacting them locally, right now, as well as the things they lose out on when politicians are beholden to the fossil fuel industry and what they can gain from cleaner, cheaper forms of energy that create economic growth and jobs.

Climate Nexus — a non-profit communications organization — aims to shift this conversation, working with journalists and organizations across the public, private and non-profit sectors to tell science-based stories about the impacts and opportunities associated with climate change. Our goal is to raise awareness for the issue itself, not a particular client or brand. We serve as a resource for the media and the broader community of organizations working on climate issues such as policy, health, energy, extreme weather, food and others.

Here's what Climate Nexus does to meet these goals. We conduct research and polling, form narratives and messaging, manage media relations, develop original content and strengthen and develop networks, all with the goal of changing the conversation on climate change and clean energy from one of argument to a constructive search for solutions.

Our most public-facing products include our daily Hot News roundup of the best climate and clean energy coverage, and our weekly Clean Energy News, which summarizes the major moments happening the sector. We also run Climate Signals beta site, a science information project that catalogues and maps the impacts of climate change, and Nexus Media, an editorially independent newswire. We work across all issues related to climate change, including climate science, the energy transition, policy, food and others. 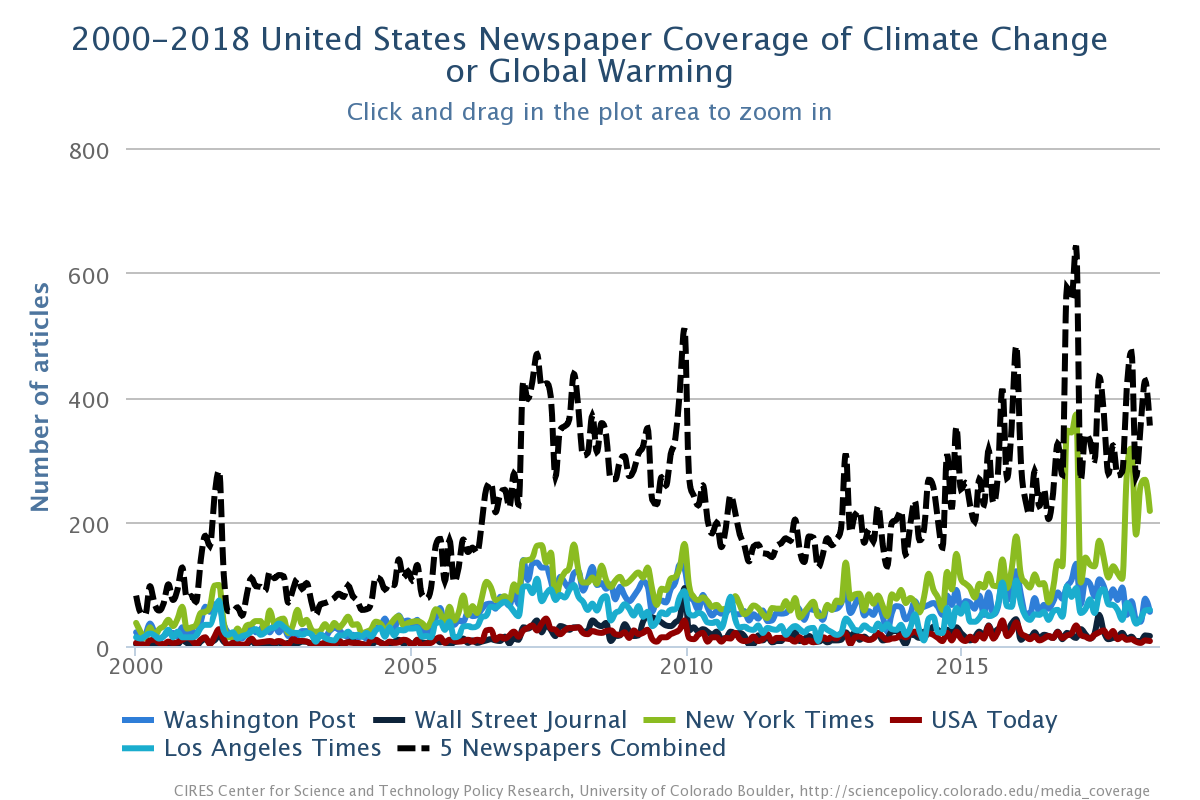 With the help of many sectors, including scientists, economists, business people, the medical community, policymakers and filmmakers, we have been successful in shifting the conversation. Credible journalists no longer cover climate change as a debate and newspaper coverage of climate change has increased since 2000. Climate change is more regularly integrated into mainstream reporting, and prominent news outlets like the New York Times have increased their team specifically reporting on climate change. Yet there is still much work to be done — in the U.S., there has been no clear increase in television coverage of climate change since 2000. Today, the Trump presidency has created an effect dubbed "Trump Dump", where media attention that would have focused on other climate-related events is now focused on Trump's actions and leaves other important climate stories untold. 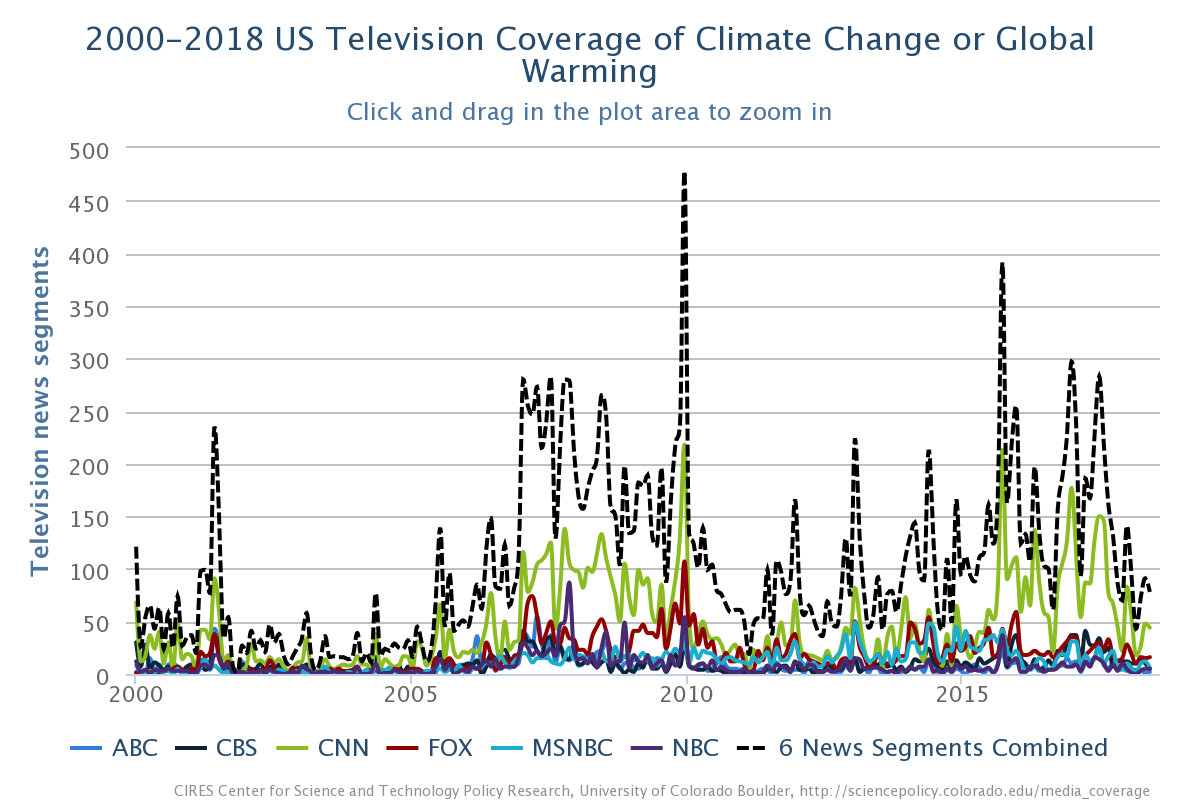 As with any message, a simple one that is repeated often is what resonates. This is especially true for climate change, which is proving to be such a "wicked" problem to solve. Good climate coverage that links everyday experiences to climate change, presents robust solutions and provides an audience with a visceral experience that leaves a lasting impact is needed now more than ever. This, in turn, can establish greater awareness and recognition of both the threat and the solutions, ultimately generating the public will and political and market action necessary to change the course we're on. The transition to a new media environment continues, and Climate Nexus aims to leverage these to help people recognize the immediacy of the climate threat and the salience of the solution.

Courtney St. John is the co-director of the Energy Transition team at Climate Nexus, a non-profit strategic communications firm focused on climate and energy issues. Courtney has extensive experience working on climate change issues, including posts in academia and for the U.S. Navy's Task Force Climate Change.