As you probably know, "80x50" means reducing greenhouse gases produced in New York City 80 percent by the year 2050. As a practical matter this almost certainly means we must reduce the combustion of fossil fuels by 80 percent — either by increasing energy efficiency or by increasing the amount of energy we produce without using combustion (or, most likely, a combination of the two). This shift must take place in every sector — transportation, industry, buildings, etc., but I will focus here only on buildings.

Technically, there is no doubt that 80x50 is achievable. But it's not going to be easy. The biggest obstacles to success will not be technological — in my experience they are almost always fear and inertia on the part of decision-makers.

But why? Inertia is easy to explain — it's usually easier to do nothing than to take action — but the fear: what's behind it? I believe the fear is the result of two factors; 1) the fear of making a costly mistake, and 2) the fear of being blamed for said costly mistake. If we can eliminate the first factor, it will go a long way towards eliminating the second, with the result that 80x50 could actually succeed.

As this column was going to press, NYC's Mayor de Blasio announced a new plan to enact legislation that would require greater energy efficiency for many buildings of 25,000 square feet or more:

This is welcome news, but the truth is, the plan does not go far enough. Since many of the usual suspects will protest, and possibly derail, this new initiative, not only must the City not back down, it must strengthen the proposed legislation and help to reduce the fear factor.

The new plan is said to include some financing assistance, which is good. But I have never been convinced that a lack of financing is a significant hurdle to implementing energy efficiency; after all, buildings take out mortgages all the time.

To eliminate the more important barrier to action — the fear of making a costly mistake — decision-makers need more convincing information than they currently have. For example, if an engineer recommends a certain energy-saving project and estimates that it will pay for itself in, say, five years, some building owners may think that's too risky. They would think differently if they understood that even if the so-called "payback period" doubled to 10 years, the project would still provide a better return on capital than almost any other investment option available.

My colleague Richard Leigh has documented this fact, and I have pointed it out many times to my clients, but it frequently did not eliminate the fear. So I propose an additional security blanket. Third parties like the NY State Energy Research & Development Authority (NYSERDA) or perhaps NYC's Retrofit Accelerator, for example, should create — and heavily publicize — case studies with measured energy savings so people will see what happens in the real world. NYSERDA does this to some extent now (Ian Shapiro of Taitem Engineering has done marvelous work in this area), but few people have heard the message. And sometimes the savings are calculated instead of measured, which does little or nothing to reduce the fear factor.

Not just any case study will do. In my view, one of the linchpins to achieving 80x50 is the elimination of my beloved steam heating systems (there is no practical way to make steam without burning fossil fuels). NYSERDA, along with financial assistance from City government, foundations and the heat pump industry. and encouragement by lenders, should convert several NYC buildings from steam heat to VRF (variable refrigerant flow) heat pumps so that a) we can learn how to reduce the cost and disruption of converting an occupied building, and b) show measured savings for heating, cooling and domestic hot water.

This must be done without delay. 2050 is only 32 years away, and Earth's sea level will inexorably continue to rise while we dither. There are roughly 25,000 buildings of 25,000 square feet or larger in New York City, and they comprise a large proportion of the total square feet. Every year, for the next 32 years, we must reduce the energy use of about 800 of these buildings by 80 percent. 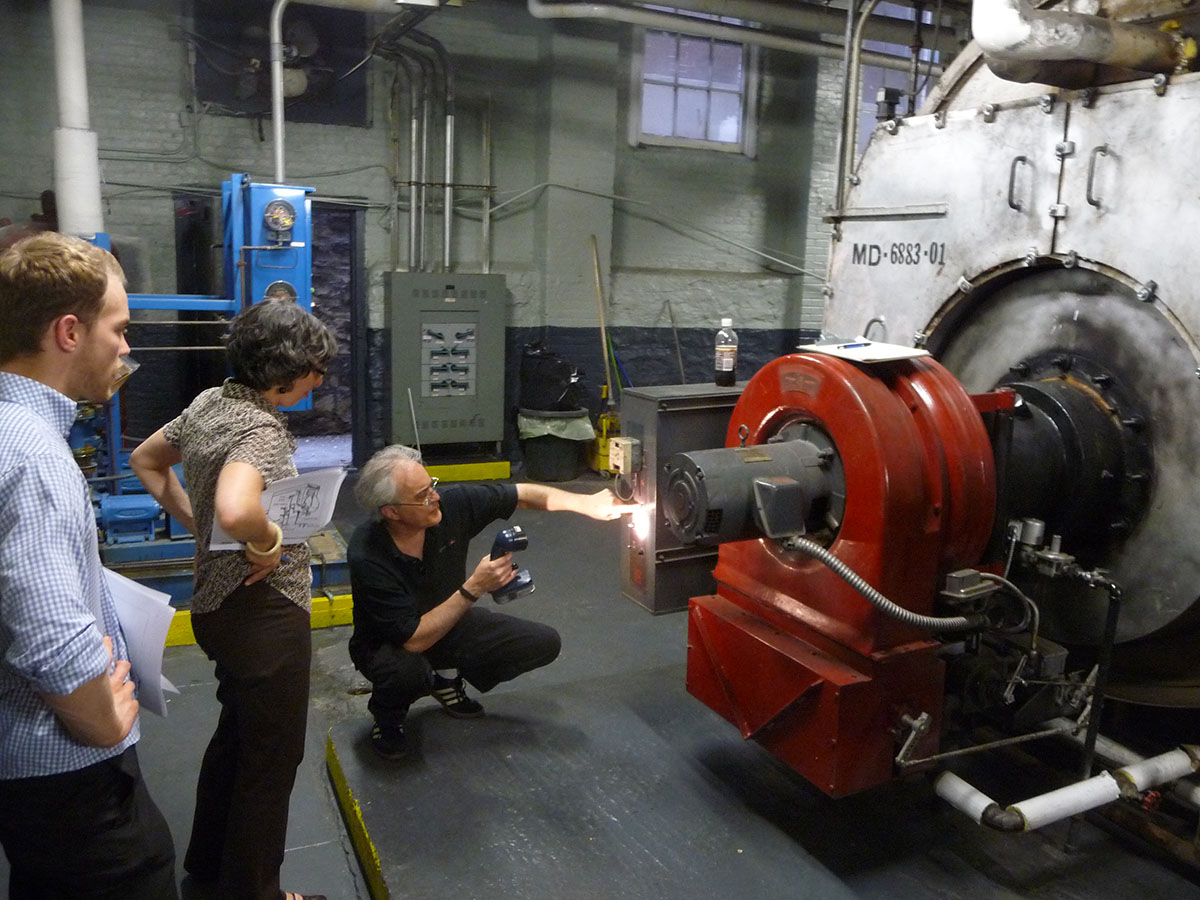 Yes, we would not need to retrofit quite so many buildings per year if we started building large solar electric farms upstate and major wind installations offshore and upstate. But at the moment neither of these things is happening on the necessary large scale. It's not enough to tweak steam heating systems and upgrade lighting efficiency, as some have suggested — we need a concerted effort that makes rapid, deep cuts in energy use and rapid, large expansion of renewable energy sources.

And those steam systems, they've got to go — now. They are grossly inefficient. Any building owner currently contemplating replacing their steam boiler will be mighty upset if, after having spent tens of thousands of dollars to do so, they find out in 5 or 10 years they must convert to a hot-water or heat pump system. So, if we are serious about 80x50, we really should be phasing out steam heating systems immediately.

Many people ask me "yeah this sounds great but who's going to pay for all this? We can't afford it!" My response is threefold:

The fight against global warming is this generation's version of World War II. Can we become the next Greatest Generation? Can we harness New Yorkers' almost limitless ingenuity and creativity to fend off disaster? Can we put aside our personal pecuniary interests and pull together for the common good? I believe we can — but we have to start yesterday.

Tom Sahagian began his energy-efficiency career working on a windmill in the South Bronx in the early 1980s. He subsequently spent a lot of time in basements, boiler rooms, electrical closets and rooftops troubleshooting building systems for the USDoE Weatherization program, NYC's Dept. of Housing Preservation & Development and various engineering firms. He has designed steam and hot water heating systems, cogeneration systems and a control package for a hydro generator. He speaks and teaches widely and served on former mayor Bloomberg's Green Codes Task Force. Now retired, he continues to work as a consultant and serves on the board of GreenHomeNYC.