In a stark change from the last century, U.S. electricity usage has barely budged since 2005. The flattening of power production is a big but unheralded reason that carbon emissions from the U.S. electricity sector have nosedived.

In a December 2016 report, I estimated that CO2 emissions from U.S. electricity generation in 2016 will be 27 percent below the baseline level from 2005. This means the power sector is now more than four-fifths of the way to the 2030 goal in the Obama administration's Clean Power Plan, to cut electricity emissions by 32 percent.

The standard narrative attributes this achievement to fracking that has allowed natural gas to grab market share from coal. A kilowatt-hour produced by burning gas in new high-efficiency combined-cycle power plants emits 60 percent less CO2 than coal-fired power, though this equation sidesteps releases of methane, a far more potent greenhouse gas, per molecule, than carbon dioxide. 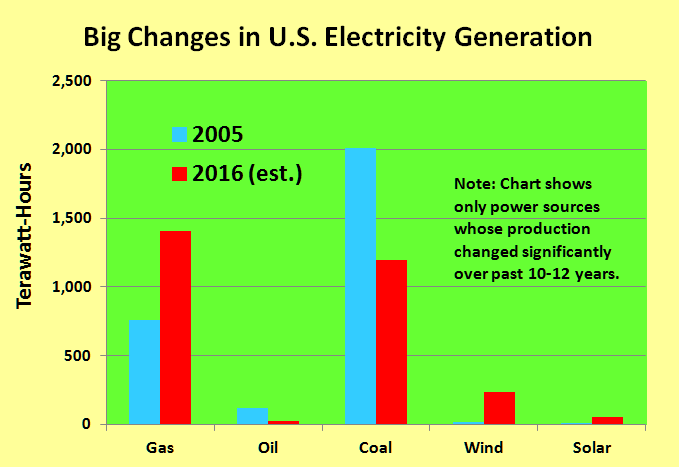 From 2005 to 2016, electricity generated from coal fell 40 percent, a drop of 800 TWh from 2,000 TWh to just 1,200 TWh, while gas-fired generation rose by almost 650 TWh. Output from carbon-free wind turbines also surged, growing by around 200 TWh. (A TWh or terawatt-hour — one billion kilowatt-hours — is a convenient metric for this discussion; total U.S. electricity generation in 2016 will come in at a little under 4,100 TWh.) Increased power from gas and wind did indeed push out coal.

However, this tidy summation omits the demand side of the carbon equation. If prior rates of growth in electricity usage had continued after 2005, the boom in gas-fired and wind-powered electricity would largely have been in addition to coal, rather than in place of it. Instead, power consumption in 2016 is going to be less than one percent greater than in 2005 — a rate of increase (if one can call it that) that used to occur every few weeks. It's because electricity consumption leveled off that the increased output from gas and wind (and, more recently, solar) has been able to reduce coal and its climate-damaging carbon emissions. 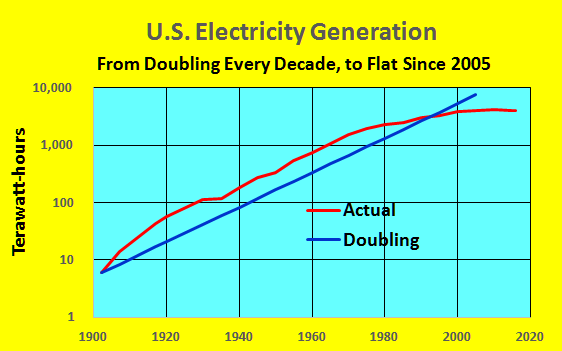 From the dawn of the 20th Century until the mid-1970s, electricity production and use in the United States increased several hundred-fold — roughly doubling every ten years. Skyrocketing demand allowed power companies to deploy ever-larger and more-efficient generators, driving down electricity prices and engendering still-greater usage — a reinforcing trend dubbed the "benign cycle" by energy economists. In the 1970s, the scale economies eventually petered out, and the mounting environmental costs began to push up power rates. Electricity use still grew, but at a lesser rate.

Even this slower growth ground to a halt after 2005, and not simply because of the Great Recession. Real GDP for 2016 will exceed 2005 output by 17 percent. Electricity generation last year would have been up by three-fourths of that increase — around 500 TWh — if usage had grown in the same relation to GDP since 2005 as it did during the prior three decades. We have to look deeper to account for the causes. Here are candidates:

• Structural shifts from manufacturing (some of which was off-shored) to service industries.

• Ratepayer-funded energy-efficiency programs, in tandem with governmental codes and standards for buildings, appliances and other end-use equipment.

• Emergence of a robust business sector that discovers, finances and delivers money-saving efficiency improvements in commercial buildings and multifamily housing.

• A shift to urban living and delayed family formation, resulting in fewer and smaller dwellings with less power-consuming appliances.

These factors are linked and mutually reinforcing, making it difficult if not impossible to tally the respective electricity savings. What we can do, however, is calculate the overall "carbon dividend" from the saved electricity: the carbon emissions avoided in 2016 because electricity usage didn't grow in relation to GDP as it did during 1975–2005.

That dividend, I estimate, is roughly 350 million metric tons — the CO2 equivalent of removing 80 million cars from U.S. roads for an entire year, and nearly equaling the 386 million tons of CO2 avoided last year due to displacement of coal by natural gas. 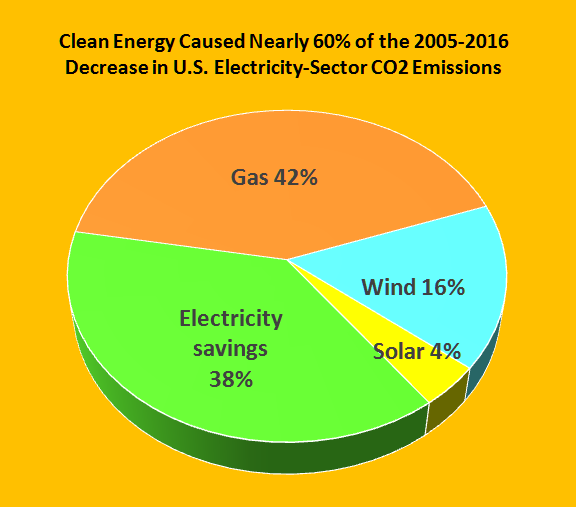 Moreover, if we combine that carbon dividend from saved electricity with the CO2 avoided by increases since 2005 in power from wind (nearly 150 million tons) and solar (almost 40 million tons), the CO2 avoided last year due to "clean electricity" (power savings + wind + solar) totals 540 million tons. That's nearly half again as large as last year's CO2 reductions from increased use of gas. And it comes without the methane and other pollution, both climate-related and toxic, which issues from fracking along with natural gas transmission and distribution.

This qualifies as a double dose of good news. First, the 2030 carbon-reduction goal of the Obama administration's signature climate program, the Clean Power Plan, is almost certain to be achieved a few years hence. The underlying economics of costlier coal, continued cheap gas and ever more-affordable wind and solar appear too robust to be seriously upended by the Trump administration. Second, a solid majority of the carbon shrinkage, not just in the past decade but probably for the next as well, will be due to clean sources — increased wind, increased solar, and, above all, electricity savings.

Yes, the Clean Power Plan's goal of a 32 percent drop in electricity emissions was always too modest. Yes, a robustly rising national carbon tax is essential to achieve deep cuts outside the power sector. And yes, prospects for any climate action in the Trump era are between dim and none. But let's be mindful of our progress to date as we organize to resist the denialists' assault on our future.

Policy-analyst and activist Charles Komanoff, a lifelong New Yorker, directs the Carbon Tax Center. Much of the analysis in this post is in his recent report for CTC, The Good News.