Affordable and supportive housing organizations in New York City have an unprecedented opportunity to save money by greening their existing buildings. This is big news for a sector that — as a matter of mission and regulation — cannot increase rents to keep up with rising utility and fuel costs.

At the same time, greening affordable and supportive housing benefits all New Yorkers: organizations like the Community League of the Heights (CLOTH) not only develop, own and operate thousands of multifamily buildings accessible to the working class; they also provide support services that help make New York a vibrant and decent city. [1] As Mayor de Blasio seeks to build or preserve 200,000 units of housing, the State is innovating energy policy through the REV process, and the Federal government supports climate change mitigation through the Paris Agreement, housing and environmental goals can jointly be advanced.

CLOTH launched a multi-year initiative, the GEM, in 2014 to increase the sustainability of both its buildings and community. When such organizations green their buildings, New York City neighborhoods become stronger. CLOTH, like many Community Development Corporations (CDCs), utilizes a comprehensive community development approach. Established in 1952, it has developed 36 buildings housing more than 1,000 New Yorkers; operates a community health clinic; built and supports a community school; directs a technology center; runs a food pantry; and provides youth programming. 100% of its housing is affordable to populations earning 60% or less of the area median income; much of the housing also is classified as supportive.[2] Rapidly rising and highly variable utility costs have created unanticipated challenges to operating its buildings, and have limited CLOTH's ability to provide additional services to the community.[3]

The GEM assesses green technologies across CLOTH's building portfolio. As the following matrix demonstrates, we identified a total of seventy-five potential improvements to CLOTH's portfolio (with projects on properties undergoing refinancing in parentheses). In sum, we projected up to $4 million in savings across technologies over twenty-five years:

We quickly realized that implementing green technologies in the affordable housing sector requires a different approach than greening market-rate housing. The availability of up-front capital is much more limited and it is a sector that is more risk-averse to spending its reserves. Meanwhile, non-monetary objectives, such as community health and wellness, are core to the missions of organizations like CLOTH — so cash may not always be king when it comes to identifying the 'right' project at each site. We also tackled additional challenges typical of CDCs including limited internal project managerial capacity; concerns over long-term operations; and complex ownership arrangements of housing.

To avoid the need for up-front capital, we advanced an innovative third-party financed arrangement for the solar hot water projects. A 3rd party owns and operates the solar thermal systems on six buildings in exchange for CLOTH purchasing, at a cost less than heating oil, the hot water produced by the solar collectors.[4] We project this arrangement will save CLOTH as much as $1.3 million in utility costs over the next 25 years. In addition to monetizing a Federal Solar Investment Tax Credit and accelerated depreciation, we took advantage of a 2015 solar thermal grant program run by the New York State Energy & Research Development Authority (NYSERDA). Of just seven affordable housing projects funded statewide by this pilot program, six of them were CLOTH's![5] This project was completed in June, 2016. In Phase II, we will advance a similar arrangement with CLOTH for solar PV to offset its common area electricity charges. 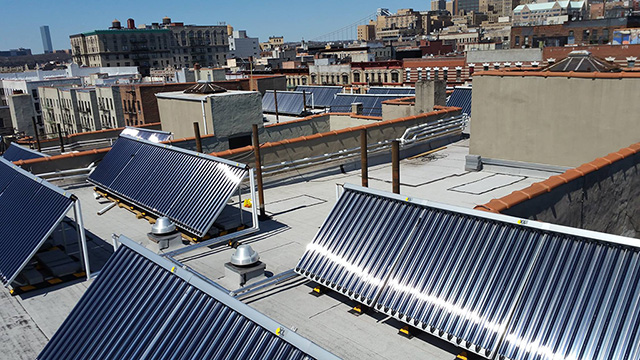 CLOTH is taking advantage of the inherent synergies among green technologies, increasing economic savings, environmental outcomes and community benefits. We will install green roofs with solar electric systems to power a building's common areas. Green roofs increase the output of solar panels by keeping them from over-heating. Green roofs also double the lifespan of roof membranes by protecting them from the elements, thus saving on periodic roof replacement costs. Battery back-up systems will be installed in tandem with the solar PV systems, providing electricity should the grid goes down.

Although larger incentives need to be in place to build battery storage across the entire solar PV scope, we will initially build batteries on the buildings with the greatest peak electric demand charges. We will build an accessible green roof later this year, and additional green roofs in subsequent years funded by the DEP Green Infrastructure Grant Program.[6] And CLOTH will build an urban farm on an under-utilized community garden to provide community education, access to fresh food, and an extension of its food pantry.

CLOTH is convinced the economics work to develop renewable energy and green infrastructure on affordable and supportive housing portfolios. The GEM, as demonstrated by the CLOTH example, provides a flexible framework for cost-effectively advancing multiple green technologies while enhancing community health and wellness. The question is not whether deals can be realized to build green technologies, but rather how to structure the right set of deals with the optimal set of technologies.

From a public policy perspective, however, much can be done to improve the existing suite of green incentives for the affordable and supportive housing sectors — resulting in more units preserved as affordable, greater environmental benefits, and stronger communities. Ironically, affordable housing frequently can utilize fewer economic incentives than market-rate development. For example, the NYC solar property tax abatement, worth up to $62,500 per building, does not help non-profits, such as CLOTH, without property tax liability. In instances such as this, grant programs of a similar or greater magnitude should be offered to not-for-profit organizations such as CLOTH, given the added public benefit of (and additional barriers to) greening affordable housing. Incentives also need to be reliable.

Programs such as NYSERDA's 2015 solar thermal grant program, a one-time pilot, should be offered annually, enabling technical assistance providers to develop long-term partnerships with low- and moderate-income households. And, incentives need to be easier to access. For instance, programs such as NYSERDA's EmPower program, which target low-income households, should pre-qualify property owners such as CLOTH that have already conducted income verification of residents, rather than requiring a duplication of similar paperwork. Finally, efforts to target low and moderate-income households with greening technologies should be measured, tracked and evaluated over time. Through an intentional and sustained approach, we can use green systems to equitably enhance New York City's housing stock, environment and communities.

[1] Supportive housing provides comprehensive services for our city's most vulnerable populations, such as people with mental health issues, people with HIV and AIDS, and youth who have aged out of foster care. Supportive housing provides a cost-effective alternative to homelessness and incarceration while providing health care and economic opportunity to our city's most vulnerable. For more information, see the Supportive Housing Network of New York's website.

[3] For example, average residential electric bills have increased 30% above the rate of inflation over the past decade (2.85% vs. 2.2%). Average energy bills have been highly variable, increasing by 16% over a 2-year period (2006 to 2008), stayed consistent several years in a row (less than 2% increase from 2010 through 2012). The recent 8% reduction in electric bills is an exception to the long-term trend. Analysis based on review of Con Edison average monthly electric bills. Prices of #2 heating oil, the type used by CLOTH, have increased in New York by appx. 130% above the rate of inflation from 1992 to 2015, and have been highly variable during this timeframe. Data provided by U.S. Energy Information Administration.

Adapted from analysis by Quixotic Systems, Inc. of weekly heating oil prices of #2 heating oil and propane from October-March during this timeframe.

[4] We targeted properties running on heating oil that did not have the available capital to upgrade to natural gas. Heating oil is substantially more expensive than natural gas, making the comparative economics with solar thermal more appealing.

[5] Six of the seven feasible sites identified within CLOTH's portfolio were built through this initial deal; a seventh may be built in a subsequent phase.

[6] The 552 Academy project is funded through City Reso A discretionary funding through Councilman Rodriguez.

Rob earned his Master in City Planning from the Massachusetts Institute of Technology and B.A. in urban history from Columbia University.