We're on the eve of a new dawn in environmental reporting by companies and investors. Some may think that's a bold prediction. Just a few months ago Ernst & Young and the Investor Responsibility Research Center Institute concluded that only slightly more than half of large, publicly-traded American companies even list climate change as a risk. And, for those that do, "disclosures often are generic and do not provide clear, concise and insightful information... a listing of generic risks."

So why do I think it's about to change? First, there is now a body of information reported and able to be analyzed. Second, mainstream investment houses like Goldman Sachs are building billions of dollars in investment products that rely on environmental data. They are not about to let disclosure backslide. Third, heavyweight members of the financial establishment — including Bloomberg LP founder Michael Bloomberg, former SEC Chair Mary Schapiro and Bank of England Governor Mark Carney — are committed to making it happen.

We may be at a tipping point, but it's been a 500-year long journey, beginning with one of the most remarkable, if forgotten, figures in history: Brother Luca Pacioli, a Franciscan Friar in 15th century Italy. 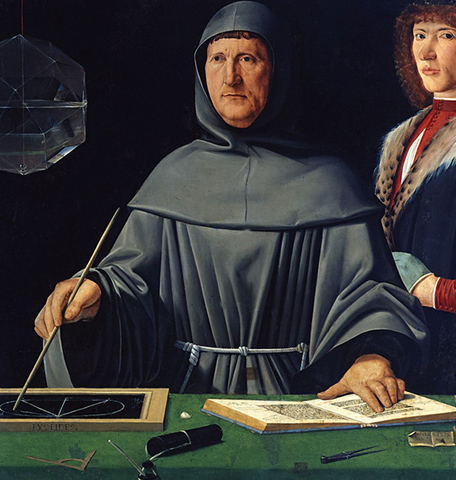 Brother Luca was a polymath. He taught perspective to Leonardo da Vinci. His book, "Everything About Arithmetic, Geometry and Proportion", was printed on the Guttenberg press. Oh, and he basically invented a transaction-based proto-accounting system. It allowed the merchants selling fish and fruit in Renaissance Florence to understand if they made or lost money. Those may have been dependent on the sea and the fields of Tuscany, but the health of the natural systems was taken as a given. As a result, Brother Luca taught people how to paint the environment, but not how to account for it.

Flash forward to the Great Depression, when the United States' corporate disclosure regimen was created. Corporate reporting, until the Depression, was largely state-regulated for a simple reason: there is no such thing as a US Corporation. Instead, there are Delaware corporations, Pennsylvania corporations, Nevada corporations. In the Depression, Washington started to regulate corporate disclosure based on the technicality that shares are traded across state lines. Therefore, the legal underpinning in the US is trading in shares. So it is understandable, if regrettable, that our national disclosure regime was founded on short-term financial indicators.

As a result, only relatively recently have we built up environmental reporting, as the importance of a viable natural system has been increasingly recognized and increasingly threatened. For instance, the Global Reporting Initiative, the first major international institution to provide a reporting framework for companies around environmental, social and governance factors will celebrate its 20th anniversary next year. CDP, formerly the Carbon Disclosure Project was founded in 2000. A host of other disclosure organizations has followed. Perhaps the most important recent addition has been the Sustainability Accounting Standards Board (SASB). Not even five years old, SASB has just finished promulgating multi-stakeholder sourced sustainability performance indicators by industry sector. SASB envisions a future when these standards are deemed "material" to investors, and so will need to be included in SEC reports and externally assured.

That future does not yet exist — though for reasons cited below it may soon — but that hasn't stopped intermediaries from using the data that does exist. Specialist advisory firms like Sustainalytics advise institutional investors on the environmental profiles and risks of the companies in which they invest. Environmentally sensitive investors like Socially Responsible Investing (SRI) funds and public pension funds use the data to make investment decisions and to engage with companies. More recently, mainstream investment houses like Goldman Sachs and MSCI have used the data to create products like low carbon index funds. There are already billions of dollars invested.

The next major step in that evolution is likely to take place at the end of this year. Bank of England Governor Mark Carney chairs the Financial Stability Board, which monitors and makes recommendations about the global financial system. Last December, at the Paris climate change meeting, COP21, he announced the Financial Stability Board (FSB) sponsored "Task Force on Climate-Related Financial Disclosures". And then he seeded it with global financial star power. The Chair is Bloomberg LP founded Michael Bloomberg. The Vice Chair is former SEC Chair Mary Schapiro.

Lest you think this is some greenwashing by a powerless advisory body, FSB members are a who's who of the financial world's power players. The three US members, for example, are the SEC, the US Treasury and the Federal Reserve. And Bloomberg and Schapiro have put their reputations on the line. They have been lobbying national stock exchanges. They have appeared before both the Investor Summit on Climate Risk and the 10th anniversary celebration of the Principles on Responsible Investment. Each time they have conveyed the same message: They expect to issue a report around the end of the year, and expect a number of national bodies to adopt those recommendations in 2017.

So the stars are aligned for corporate environmental disclosure to improve. But stars can fall out of the sky. To keep them shining, here's what you can do.

It's taken half a millennium to get to this point. But the next half a year may be the most crucial of all.

Jon Lukomnik is executive director of the Investor Responsibility Research Center Institute. His new book, What They Do With Your Money: How the Financial System Fails Us and How to Fix It has been endorsed by people as varied as former UK Prime Minister Gordon Brown, Yale Chief Investment Officer David Swenson, and former Oxfam GB head Dame Barbara Stocking.