Mapping The Way To A Brooklyn Passive House

Given the opportunity to do something with the potential to be world changing, would you take that chance?

Our story begins in 1992, when the original Green Apple Map of NYC debuted. The creative outcome of my 'light bulb' moment — enriched by a group process — provided people with a surprising perspective on a familiar place. That place-based visual catalyst has sparked a global sustainability mapping movement, and today, in 65 countries, locally made Green Maps generate meaningful action as they bring resources for sustainable living into view. Each edition is a powerful tool for finding our way and finding that we're not alone.

Here's how energy moved to the forefront. Green Mapmaking had already spread to every continent when the Great Northeast Blackout of 2003 struck. Coming so soon after 9/11, it propelled me to consider the security crisis of our dependence on fossil fuel, and before the lights came back on, the Powerful Green Map of NYC began taking shape. It was exciting to assess our city's progress as our nonprofit highlighted everyday efficiency and renewable investments in the five boroughs along with the dark side of our energy choices.

Adding location-based technology to accelerate the human power generated through our process, Green Map System developed a social mapping platform that doubled our global reach. At the same time, climate change, renewables and efficiency kept bubbling on my local front burner. I joined NYU-Poly ACRE's first cohort of the Clean Tech Execs, and pitched in as an advisor to the solar charging station start-up, Sol Design Lab. Extending engagement in urban energy issues, I also joined the board of ABC No Rio, an arts and activism nonprofit that is fundraising to build a new Passive House building on the Lower East Side. 'Passive House' started as a German near-zero-energy building performance standard. Thousands of these buildings have proven their value in Europe, yet it's still new to the US. There is now a groundswell of interest (see NYpassivehouse.org) as more and more professionals agree that this is the way forward.

I already knew ABC No Rio's architect, Paul Castrucci, as he and my husband Ray Sage, an electrical contractor, have worked together. As I learned more about the remarkable benefits of Passive House — excellent air quality, quiet comfort and the security of being 90% more efficient than neighboring buildings, we wanted to figure out how adding solar could produce a net zero energy capable building, free from the dangers of fracked gas and fumes from other energy dinosaurs that are driving us to extinction.

In Summer 2012, we bought an empty lot that met our criteria for solar exposure, well outside flood zones in Prospect Heights, Brooklyn. We were determined to create a model that exceeds current thinking and build one of NYC's very first built solar Net Zero buildings, capable of generating all the energy needed by residents. Informally, we named our venture Further, Inc. and dubbed the building R-951 for resiliency, the R-value of its super-insulated structure and its address at 951 Pacific. 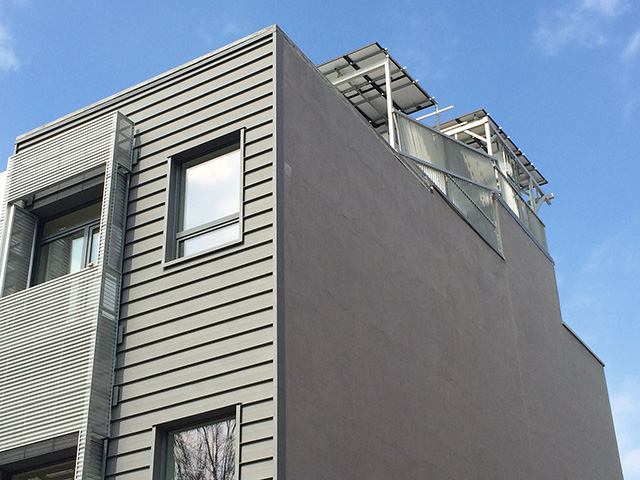 Today, as construction nears completion, we received the first Con Ed statement with zero due for the current billing period. 50 solar panels are now delivering all the power rated to be needed for three residences, each of which has high performance heating and cooling plus an energy recovery ventilation system that reduces humidity while cleaning allergens and pollutants out of the incoming air. We worked with Aeon Solar to design a 12.5 KW solar photovoltaic array that is tied to the utility grid, so the 'meter spins backwards.' The future residents never have to worry about cloudy days, and each apartment even has a backup outlet for power for that rare moment when the grid goes down.

Building up, layer by layer, every facet fuels resiliency. For example, the large triple glazed tilt and turn Schüco windows and doors. Delivered in a massive crate, I could not even imagine how these would be set in place and could not bear to watch as they were installed in the building envelope. Engineered to keep sound out and BTUs in, it's easy to see how these and other features, such as the 1,200 gallon rainwater catchment tank in the backyard, secure the building and contribute to a cleaner city.

The 'R' in R-951 also stands for 'our'. We are sharing the good news about certified Passive House, net zero energy and how new development can contribute to the Mayor's 80 x 2050 goals by detailing systems at R-951.com and conducting building science open houses. So far, 400 interested New Yorkers, professionals, and students have toured, and many witnessed the 'blower door' air-tightness testing. Much of our research is quite valuable to other architects. For example, we found that exceeding New York City's building and energy code requirements gave R-951 a 350 square foot Floor Area Ration bonus that allowed us to build three 1500 square foot duplex condos on a 20 x 100 foot lot. Everyone's curious about the incentives, such as the NYSERDA New York Energy Star Certified Home Tier 3 grant. Both the developers and the future homeowners receive tax abatements for the solar array, which is clearly visible from the street, making it a good site to put on the Green Map!

From mapping change to building a benchmark, I hope this energized journey fuels your own trajectory and helps makes world-changing a part of your everyday work.

About Wendy E. Brawer, Founding Director — Green Map System and Partner — Further, Inc:
Brawer is an eco-designer and social sculptor best known as the founding director of Green Map System. An early contributor to the emerging green building scene in New York, Wendy has worked on energy, waste reduction and other issues impacting New Yorkers' quality of life since 1990. Formerly the Designer in Residence at the Smithsonian Cooper-Hewitt National Design Museum and an Utne Visionary, Wendy is actively involved in resiliency, knowledge sharing and communications projects, as described at https://www.wendybrawer.com.