Language Matters, Or What Should I Do With My Banana Peel?

Let's talk about paradigm shifts and disruptive technologies — when and where they're least expected, in places usually out of sight/out of mind.

Today, big changes are underway in the nation's utilities that manage what used to be called sewage, or wastewater; changes with the potential for answering the question of how best to deal with your banana peel while forging the future of energy self-sufficiency.

Under the banner of “the utility of the future,[1]” ‘water resource recovery centers’ is the new name for what used to be called wastewater treatment, or water pollution control plants, or publicly-owned treatment works. So says the Water Environment Federation, the leading professional association, officially changing its lexicon as of January, effectively banning “wastewater.”

Why this shift in paradigms and language? As with “zero waste” programs that move beyond recycling to focus on reducing what we bury in landfills and burn in incinerators, new technologies are able to manage our liquid waste (what we flush) as a resource — and make three important products from it: clean water, renewable energy (in the form of biogas, which is primarily methane), and fertilizer products (also known as biosolids[2]).

What is this disruptive technology? It's more than one thing, but the principal tool is effective use of anaerobic digestion (AD) — solid organic material is extracted from wastewater and sent to a sealed container where micro-organisms digest it, and generate methane in the process. Think of it like your stomach — you feed it food, and it produces energy for your body (along with some excess gas). In fact, AD technologies aren't “new” — just to the US; thousands of such facilities exist in Europe, and are now migrating to North America, where, to date, they've been limited to dairy farms and larger wastewater plants.

Typically, sewage treatment plants are among a city's leading users of electricity. In contrast, modern water resource recovery plants are capable of becoming energy self-sufficient, even returning energy to the electrical and natural gas distribution systems. Research by the Water Environment Research Foundation confirmed that wastewater contains ten times the amount of energy needed to process it, and could provide 12% of the U.S.'s energy needs.[3]

Pushing that envelope, in 2012 the East Bay Municipal Utility District in Oakland, California became the first North American wastewater agency to be a net producer of clean renewable energy — in part by digesting some of San Francisco's commercial food scraps.[4]

In New York, the newly upgraded and expanded Newtown Creek sewage treatment plant — with its eight architecturally distinctive digesters — will become a source of biogas for National Grid to inject into its pipeline. 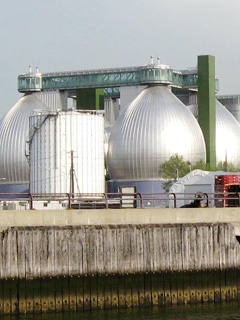 No fracking required. A generation ago, New York City was a leader in utilizing anaerobic digestion at its treatment plants, with support from the New York Power Authority, but over time, loss of both focus and reinvestment undercut this leadership. A new generation of initiatives is underway — upgrading and reactivating aging digesters — to optimize the potential use of existing assets for converting locally-generated organic feedstocks into biogas.[5] What's left over can be converted, generally through composting, into products that fertilize soils. To complete the cycle, until two years ago, nearly all of New York City's biosolids were land-applied to replenish soils.

Referred to as “co-digestion” — combining sludge and high-energy organics — nearly twenty of the largest utilities in the U.S. are going beyond wastewater to take in other sources of organic material, including food scraps from food processing industries, as well as food markets and institutions. Utilities in Boston and Chicago are shopping for organic wastes that can take full advantage of available capacity in their digesters. While most utilities use that biogas for their own heat and power needs, some are converting it into biofuel for fueling their vehicle fleet.

Privately owned merchant digesters are popping up, too — nine of them in Ohio, and two more in western New York, developed and operated by Quasar Energy, which morphed from an accomplished composting company, which also partnered in the recent "Five Farms" project in Rutland, Massachusetts. Another sign of an emergent industry, the American Biogas Council, launched in 2011, helps advance this new industry as an equal partner to other forms of renewable energy, like wind, solar and geothermal.

Once headed down this path, other opportunities arise: four U.S. cities are assessing the efficacy of food waste disposers, a/k/a garbage disposers, to divert residential food scraps from garbage trucks into the water resource recovery system. In this form the methane/biogas is cheaper to transport and is easily processed into clean water, biogas and biosolids. Philadelphia, Tacoma, Chicago and Milwaukee, and Boston later this year, are installing and measuring the waste-reduction benefits of disposers in target areas, with early indications that an advanced disposer with some education to optimize its use can make a huge difference — making clean kitchens and environmentally responsible systems.

Three Northeastern states — Vermont, Connecticut and Massachusetts — are adopting, either by statute or regulation, bans on the landfilling of all organic wastes, focused initially on food waste generated from larger institutions and food-related companies. Such bans will accelerate the expansion of biogas production systems, as well as complementary composting operations.

Why is this such a big deal, a veritable paradigm shift? With food waste estimated to be the fate of as much as 40% of the food produced each year[6], and most of it getting buried in landfills, the opportunity to exploit food scraps as a renewable resource is an opportunity too good to waste. Even EPA has targeted food scraps as a primary area of focus[7].

In short, now there's hope for your banana peel because it doesn't have to be trashed at the landfill or the incinerator. Instead, it can serve as a renewable resource that replenishes soils, renews water, and reduces greenhouse gas emissions.

[1] The Water Resources Utility of the Future: A Blueprint for Action (NACWA/WERF/WEF), From the foreword:
This project was advanced because a group of industry leaders arrived at a shared realization that the challenges (and opportunities) faced by wastewater agencies are unprecedented and that some of the paradigms that have been in place for decades are changing to meet these challenges. This Blueprint underscores the need for the clean water sector to work together to shape the landscape of clean water going forward. It also highlights the type of collaboration that is needed to ensure a sustainable future that minimizes waste, maximizes resources, protects the ratepayer, improves the community, and embraces innovation in an unprecedented manner.

[5] See PlaNYC2030 — 2011 update: Biogas Approximately 7% of the City government's GHG emissions come from methane that is vented and flared at wastewater treatment plants. If captured, this gas could be injected into the natural gas distribution system or productively reused as fuel for on-site power and heat generation for our buildings. We are pursuing innovative cogeneration and waste-gas-to-grid projects at the Newtown Creek and Wards Island Wastewater Treatment Plants. These projects can reduce greenhouse gas emissions with minimal direct cost to the city and will establish a financial model that can be replicated at other urban sites. By 2017, we will reuse 60% of the anaerobic digester gas produced in our wastewater system.

[6] Wasted: How America Is Losing Up to 40 Percent of Its Food from Farm to Fork to Landfill: Getting food from the farm to our fork eats up 10 percent of the total U.S. energy budget, uses 50 percent of U.S. land, and swallows 80 percent of all freshwater consumed in the United States. Yet, 40 percent of food in the United States today goes uneaten. This not only means that Americans are throwing out the equivalent of $165 billion each year, but also that the uneaten food ends up rotting in landfills as the single largest component of U.S. municipal solid waste where it accounts for almost 25 percent of U.S. methane emissions. Natural Resources Defense Council, D.Gunders, 2012 — NRDC Issue Paper AUGUST 2012 I P:12-06-B.

Kendall Christiansen is the principal of Gaia Strategies, and senior consultant to InSinkErator, leading its public affairs work across the US and Canada; he was founding Assistant Director of NYC's recycling system, chaired the Citywide Recycling Advisory Board, and worked in/around NYC's waste/recycling sector for many years.