Leave No Doubt About It 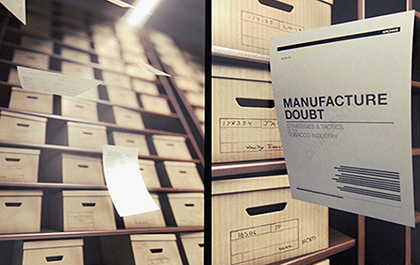 At a recent screening of "Merchants Of Doubt" sponsored by Social Cinema in collaboration with the Environmental Defense Fund, Nancy Anderson asked Robert Steiner to review the film for Sallan. Sony Pictures Classics acquired worldwide rights from Participant Media and Omidyar Network — it is scheduled to be released 6 March.

The documentary, The Merchants of Doubt, directed by Robert Kenner of Food, Inc., skillfully unravels the shadowy forces behind the manufacture of uncertainty that has stalled action on the climate issue for decades.

Back in 2002, the book Toxic Sludge is Good for You: Lies, Damn Lies and the Public Relations Industry, by John Stauber and Sheldon Rampton, opened my eyes to the trickery of the P.R. industry and its power to shape our reality, manipulate public opinion, and make us believe what their corporate clients want us to believe. It seemed obvious that the tactics and techniques they used needed to be exposed, and now, we have the documentary, The Merchants of Doubt, which has accomplished that task, perhaps for the first time. I consider this a distinguished public service.

Based on the book by science historians, Naomi Oreskes and Erik M. Conway, this is a movie about deception, depicting P.R. giants such as Hill and Knowlton, a leader in the field of manufacturing reality, who, we learn, were major players in the campaign to delay — for 50 years — the certainty that smoking cigarettes caused cancer. They were instrumental in developing and deploying a strategy that created doubt, which it turns out is not that difficult to do, and pays big dividends. This simple technique successfully allowed a half-million deaths from smoking to occur.

Today, it's déjà vu all over again, as H&K and other PR players have been retained by the fossil fuel industry, and the flame retardant industry, and surprise, they have employed the same playbook to confuse, obfuscate, and confound, all in service to the big prize — to delay action on the climate issue.

Scientists, who are overwhelmingly certain of the fact of human-caused climate change are admittedly not the world's greatest communicators, and clearly no match for the verbal skills of a just a handful of well-paid corporate shills. These "spokesmen" for the fossil fuel industry express the point of view of climate deniers, with few or no scientific credentials or knowledge, but are routinely trotted out by the media in the name of "balance" to debate the issue on TV.

Review
The documentary, The Merchants of Doubt, directed by Robert Kenner of Food, Inc., skillfully unravels the shadowy forces behind the manufacture of uncertainty that has stalled action on the climate issue for decades.

The movie draws the parallel between a magician and con-artist who masterfully deceives ("honest deception" he calls it), and the distortions of the P.R. firms and their hired guns who skillfully obfuscate the truth about climate change. But that is just the latest trickery as we witness the history of doubt-creation, beginning with the cigarette industry's success in keeping their clients profiting for decades after it was known that cigarettes caused cancer.

The corporate "spokesmen" who Kenner has tracked down and put on the record, speak with truly chilling candor — they seem to truly relish the game of climate denial, going head to head with the experts, who are not up to the task. The film succeeds compellingly in highlighting the ingenuity of the skeptics, and leaves one wondering why it took this long know the truth.