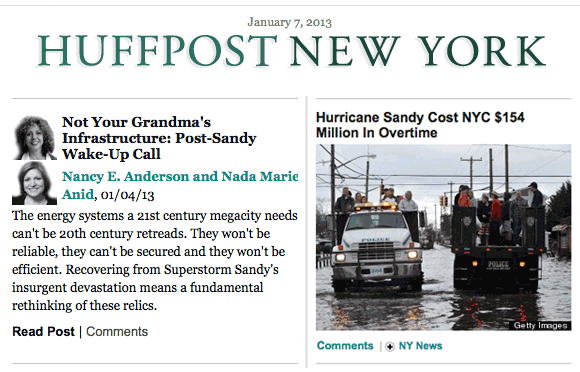 Now we know. The energy systems a 21st century megacity needs can't be 20th century retreads. They won't be reliable, they can't be secured and they won't be efficient. Recovering from Superstorm Sandy's insurgent devastation means a fundamental rethinking of these relics.

Let's take a step back and see how we got into our current predicament. Since the 1880s, when the nation's first central power generating station opened on Pearl Street in lower Manhattan, New York City has become an insatiable power consumer. Today's 20th century means to satisfy that appetite are being challenged and reshaped by the breakup of 'natural' utility monopolies, altered utility regulations, new classes of investors and ownership structures, and the availability of novel renewable technologies.

The impact of increasing commitments to national energy security, clean air, and climate change are also looming change-agents. In this shape-shifting environment, promoting an energy revolution will entail creative destruction — a process by which new technologies and ways of doing things are developed that destroy and replace the old ones.

The questions now before us are — in the wake of a system of large centralized power plants strung together by old-fashioned wires that's been slammed by Irene, Sandy and recurring blackouts — what should be the future of New York City's energy infrastructure? Could it, should it, mainstream a meshwork of distributed generation technologies, such as microgrids and combined heat and power systems? The answer in our view is that decentralized systems equipped with smart technologies are the better way to keep safe and warm at home and at work. It certainly is the view of many at the leading edge of the power-supply industry, academia, real estate and energy policy.

The Sallan Foundation and NYIT sponsored the recent conference Not Your Grandma's Infrastructure: The Urban Energy Revolution to bring together energy system experts: the advocates and the experienced. Here is what we learned. The old system is frailer than we thought. It is changing before our eyes while, at the same time, it faces significant limits on expanding in its current form. Consider these new normals: Coal, until recently the dominant power source in the U.S., has lost its dominance. Nuclear power is staggeringly expensive to build and takes decades, if ever, to permit and complete. New York City has banned dirty but ubiquitous #6 heating oil. And now, warnings are appearing about the vulnerability of the nation's power grid to malicious hacking and disruption. Remote messing with the grid has nothing to do with whether transmission wires run above-ground or underground. While underground wires may be safe from high winds and the wrath of NIMBY, that won't keep them safe from hostile hackers bent on attacking our country. To top it all, super storm Sandy taught us that we have to act now as climate change is happening, whether or not Sandy was caused by it in part or in whole, and that the old engineering and policy ways protect us neither from Mother Nature nor hacking attacks.

Con Edison expects on-site generation technologies to improve and their costs to decline, meaning the PlaNYC 2030 goal of producing 800 megawatts of distributed energy by 2030 may be attainable. Scaling up the adoption of distributed energy will entail legal issues of land ownership, access across public right of ways, and the exclusivity of a utility franchise in a given area, just to name a few foreseeable challenges, bearing in mind that microgrids represent just one of the technological alternatives to the conventional power grid.

To become the new urban normal, alternatives to the 20th century legacy model must include accountability measures and harmonize with a larger energy infrastructure where progress is monitored and, at times, course corrections undertaken. We are excited by the potential to easily integrate nearby renewable energy sources and increase energy efficiency since electricity losses resulting from transmission from far-off power plants will diminish, which combined, make microgrids a plus for clean air and a cooler planet.

We know now that financing local microgrids is doable. The microgrid business model has gotten brighter due to a recent Federal Energy Regulatory Commission order. It requires payments to consumers who reduce their demand for electricity from the power grid equivalent to the price of the electricity they produce from generators; a watt-hour of energy saved is as valuable as a watt-hour of energy generated.

We also know that financing distributed generating projects won't be easy. Replacing a known system, despite all its limitations, with something largely unknown outside of a small cadre of academic campus-type demonstration sites like the CHP system at New York University's Washington Square location, takes something more than inspiration. The physical, institutional, financial, regulatory and habitual systems of powering our cities bears down with great inertial force. Yet we are certain that we are a city and nation of problem solvers, able to transition from the impossible to the inevitable where the need is clear and the benefits are undeniable.