Outfitted with some of the newest equipment to study the impact of climate change on ecosystems, the French research vessel provides samples and data to the scientific community worldwide. The TARA Oceans Expeditions is also designed to address poor communication between basic science (scientists) and the general public. Dr. Eric Karsenti said, "doing an expedition like this on a boat would help to communicate to the public a little bit of the excitement scientists can have doing science and to educate children to inspire the next generation."

The 119 foot expedition schooner Tara has been sailing around the world on a voyage of exploration and is now docked in NYC at Battery Park, North Cove Marina until 12 Feb. — walk over and take a look.

A recent article in the PLOS Journal, A holistic approach to marine eco-systems biology presents some of their findings to date. 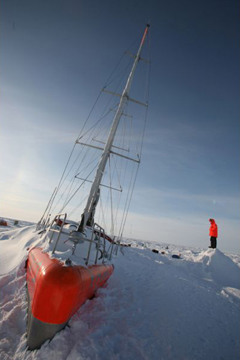